This week I went riding at the Sage Meadow Ranch near Custer State Park. When I stopped to explore this old homestead site I found a beautiful and unexpected experience. 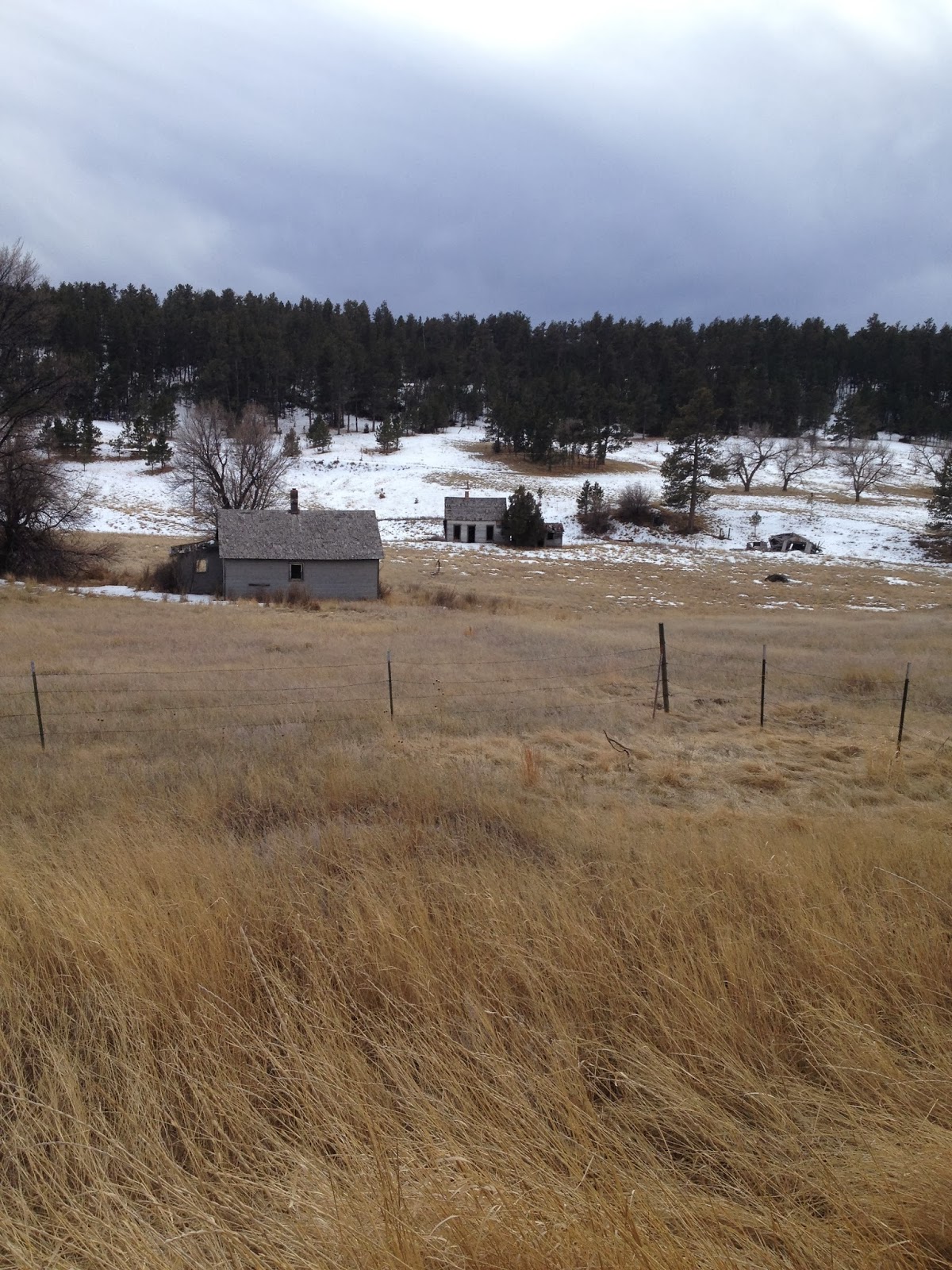 One of the turns on the way to the ranch is marked by this homestead site. 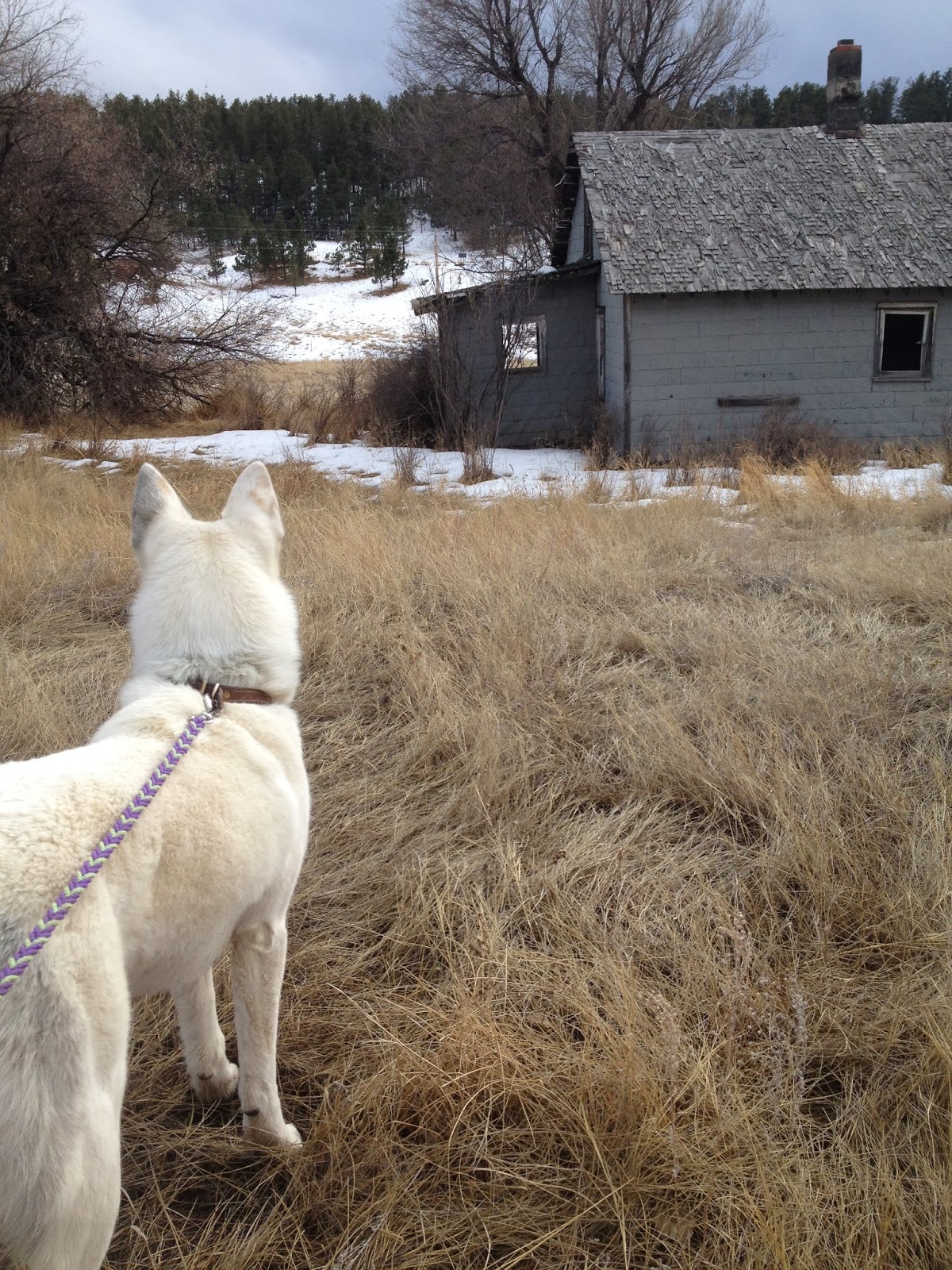 It looks like a dozen other falling apart buildings that I saw today but looking closer I found a treasure trove of history and memories. The remains of six structures stand on this piece of ground, each telling the story of a different era.


The big house is closest to the road.  There are scraps of wooden shingles still on the roof and the house is painted a neat grey.


Inside are the lasting remains of a life lived in the 20th century.  Appliances and mattress springs are scattered on the broken boards that used to be the floor and light pours through between roof beams. 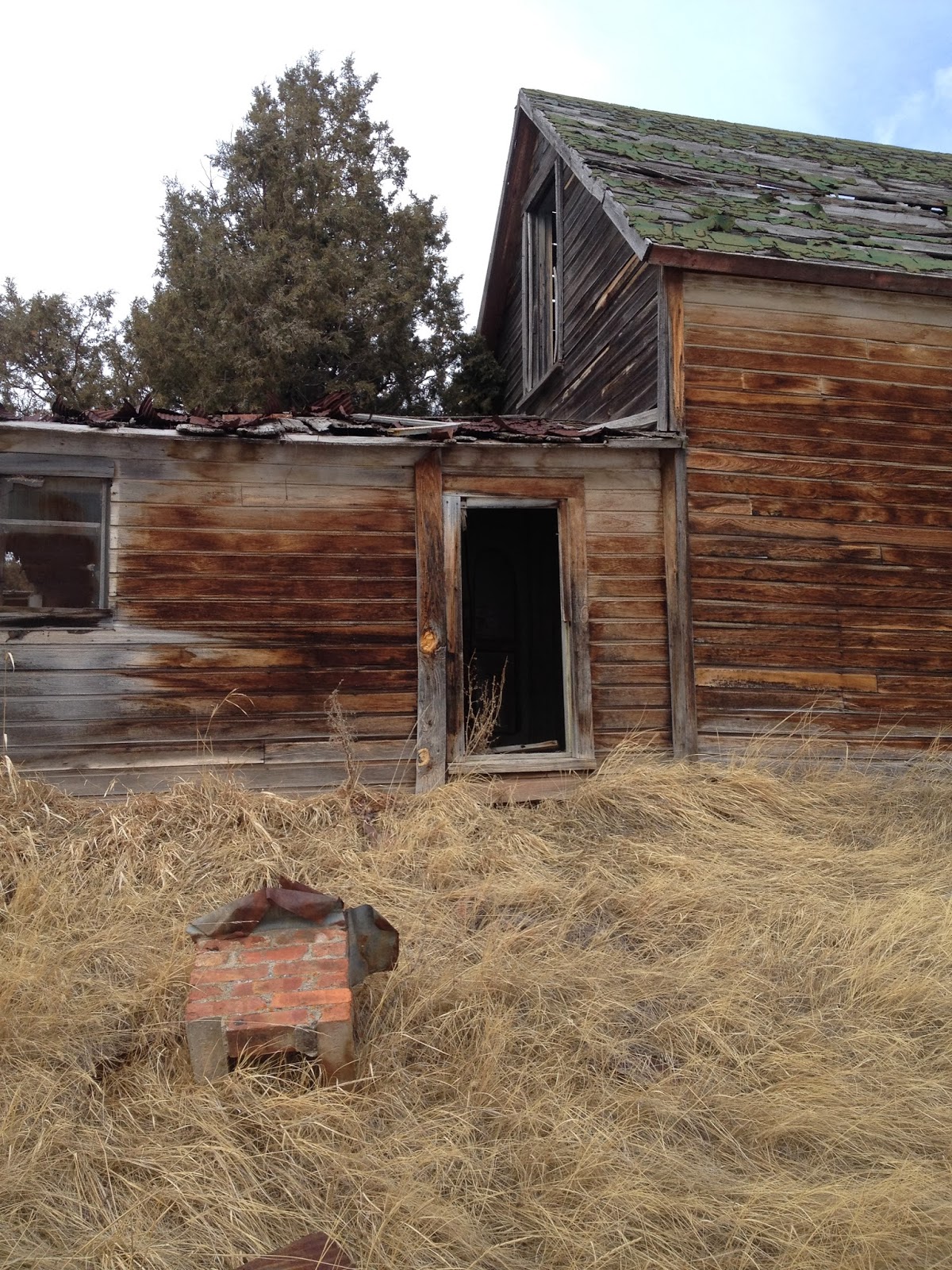 The front side of the neat grey house shows the ravages of time more than the back.  The paint has been stripped from the wood and the roof is growing moss.

This big house faces a creek. On either side of the tiny creek are wooden posts and lintels.  These lonesome structures were once doors leading in to dugout homes.  For those, like me, who grew up on the books of Laura Ingalls Wilder, a real dugout touches a wealth of memories.  This kind of structure is basically a hole in the ground with a roof built over it.  Families like Laura's spent their first winter in this dark smokey pit, safe from the mind bending power of prairie weather, hoping this homestead gamble would not take their lives or their sanity. 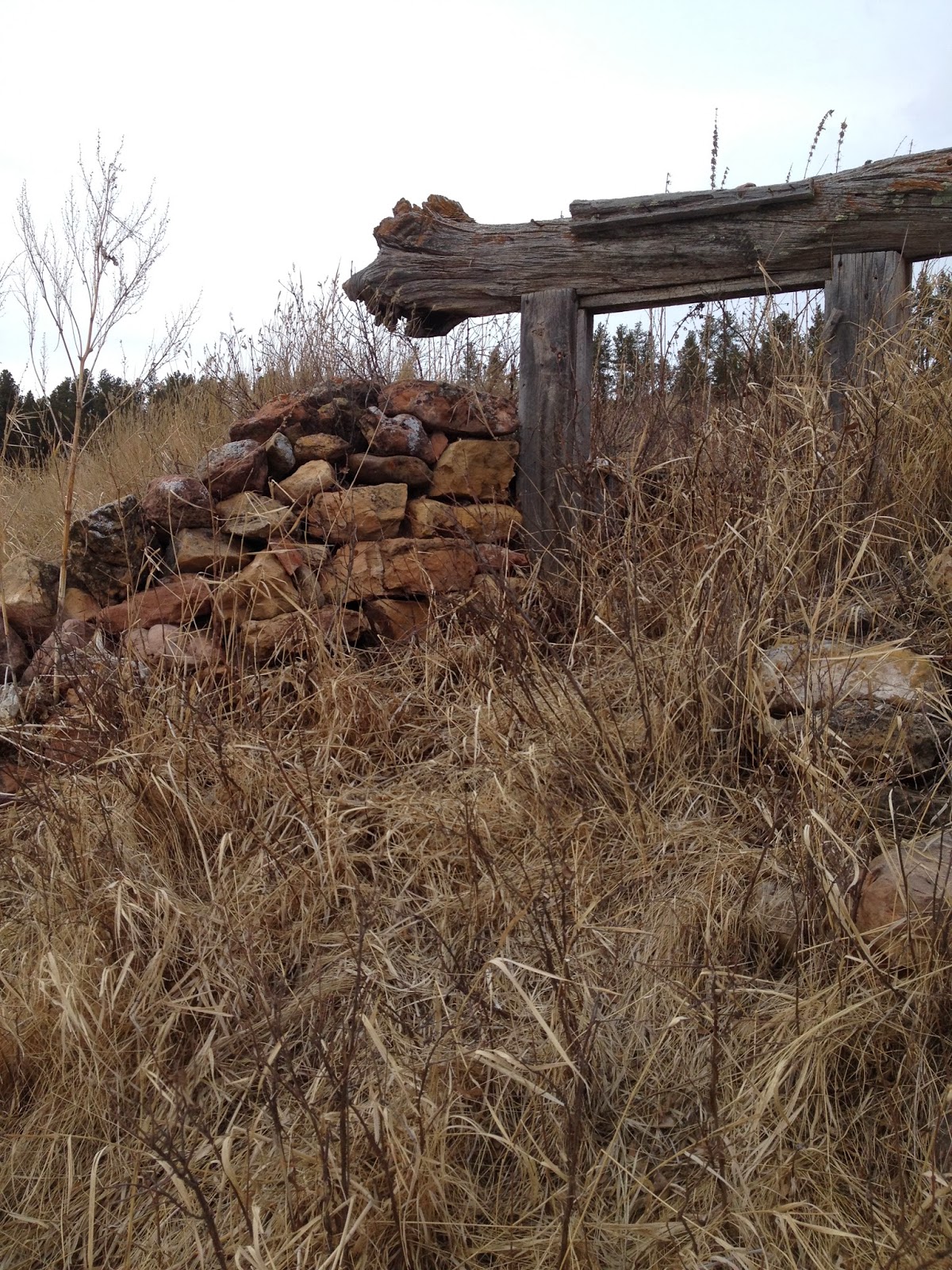 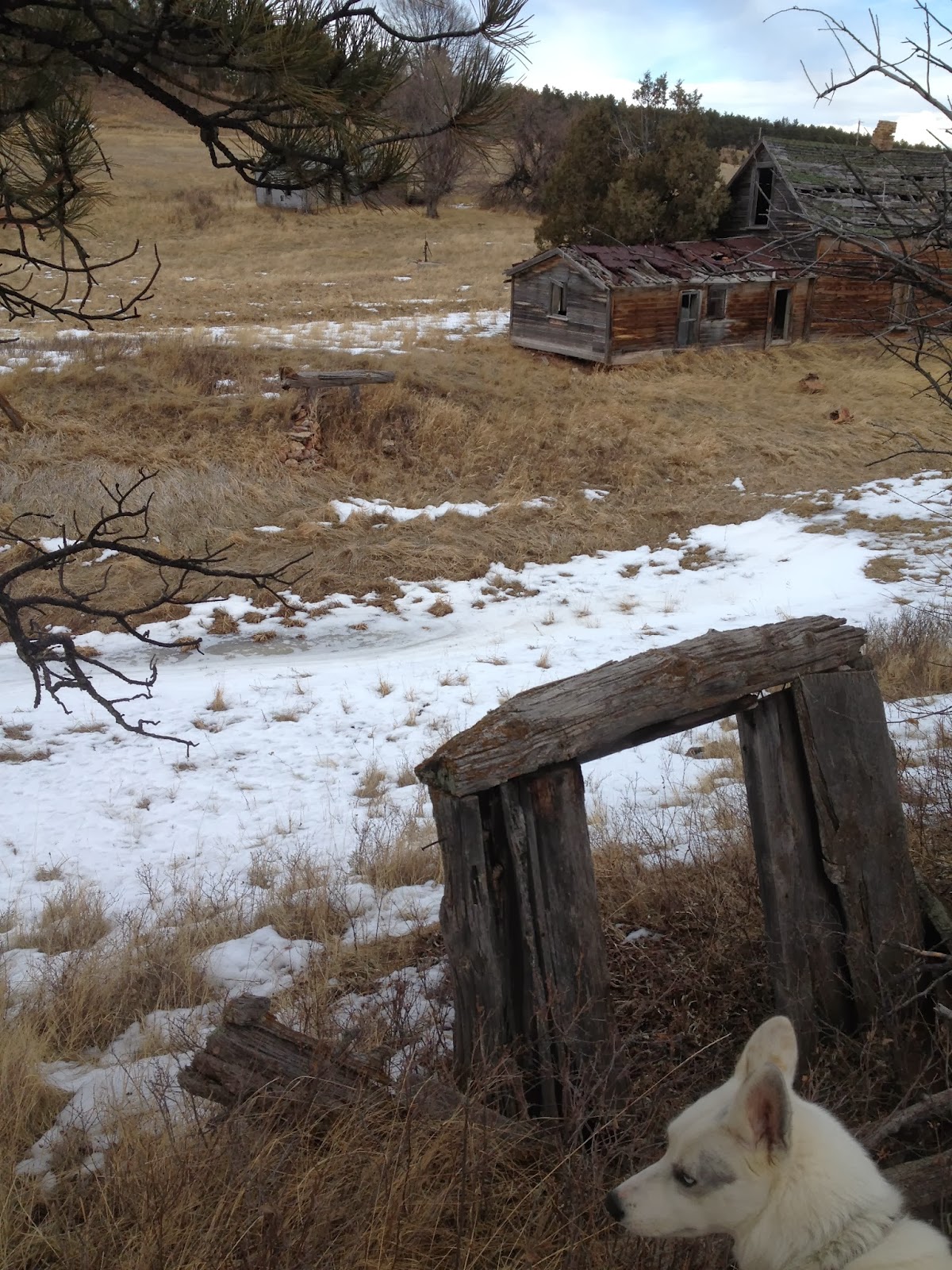 Just a few more yards down the creek is another more modern house.

A little further down a third house did not remain standing.
When I showed this picture to my mom she repeated the joke that when the wind stopped blowing the house had nothing to lean on anymore.  The wind is a force to be reckoned with when you are building a home in this part of the country. 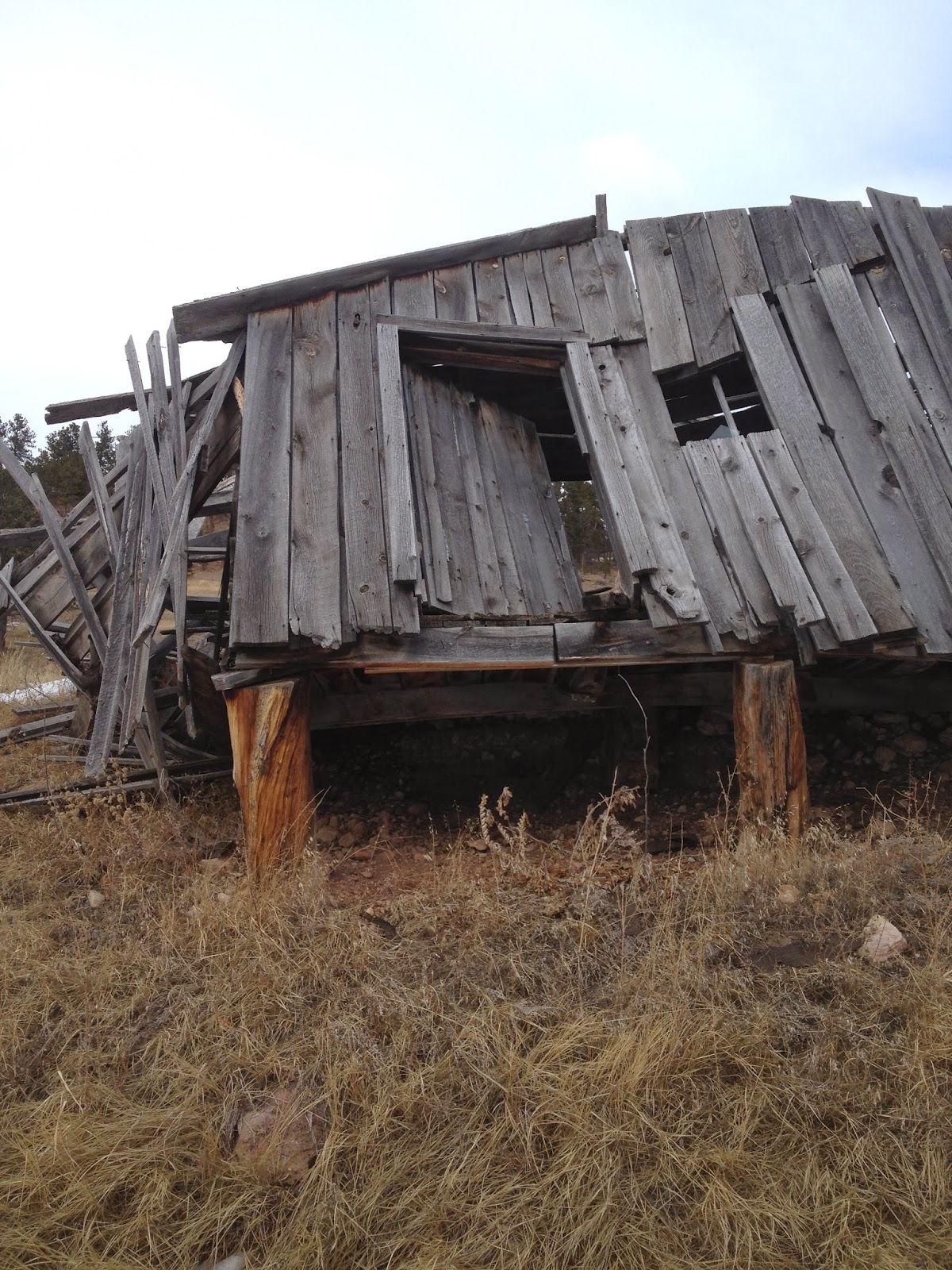 The foundation of this house appears to be set up on stilts.  Is this the reason the house fell when three others remained standing?

The house furthest downstream is my favorite structure. A log cabin! This is the structure that the huge log mansions you see in mountain towns are based on.  No, they don't have the same feel to them. 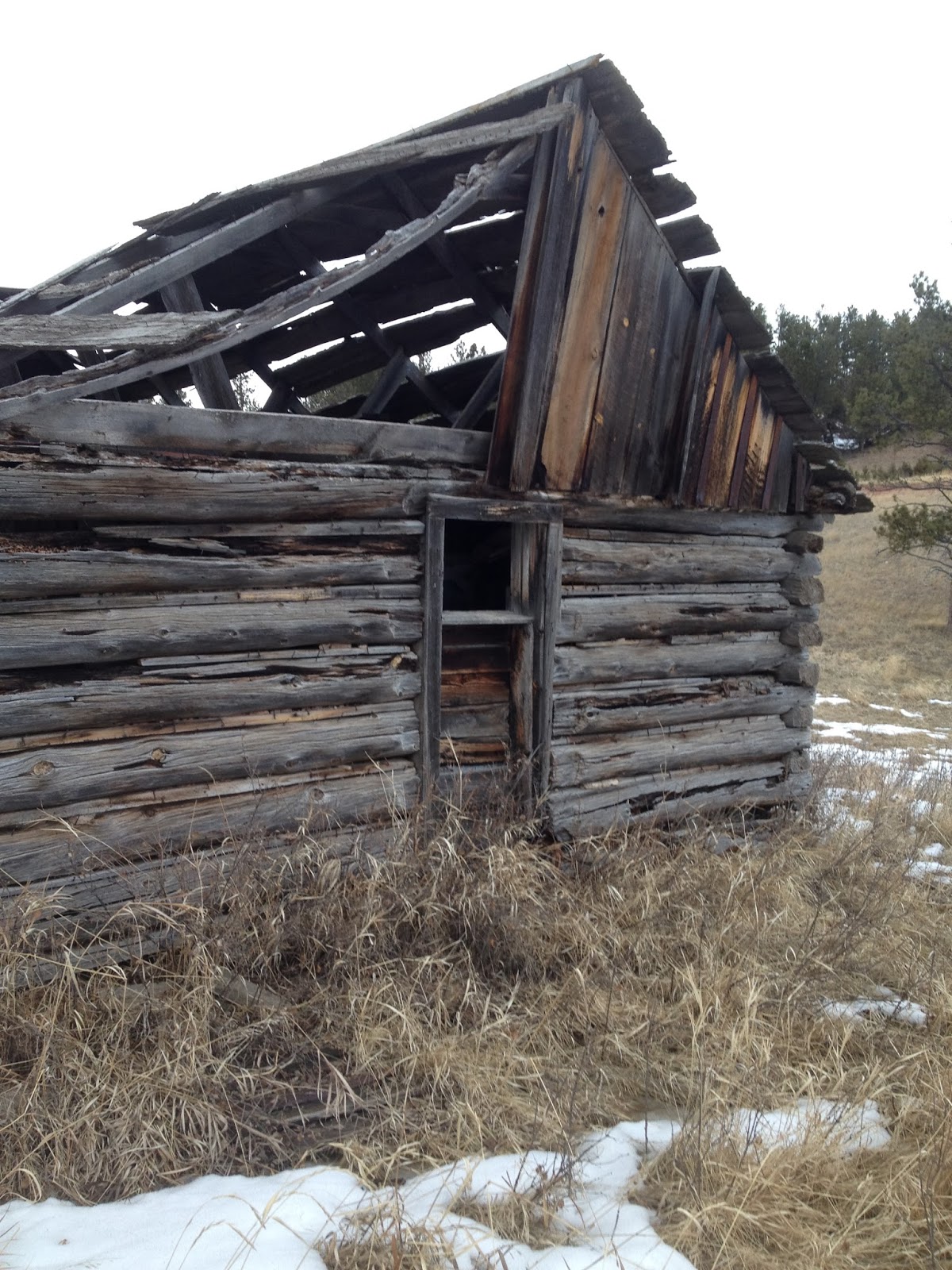 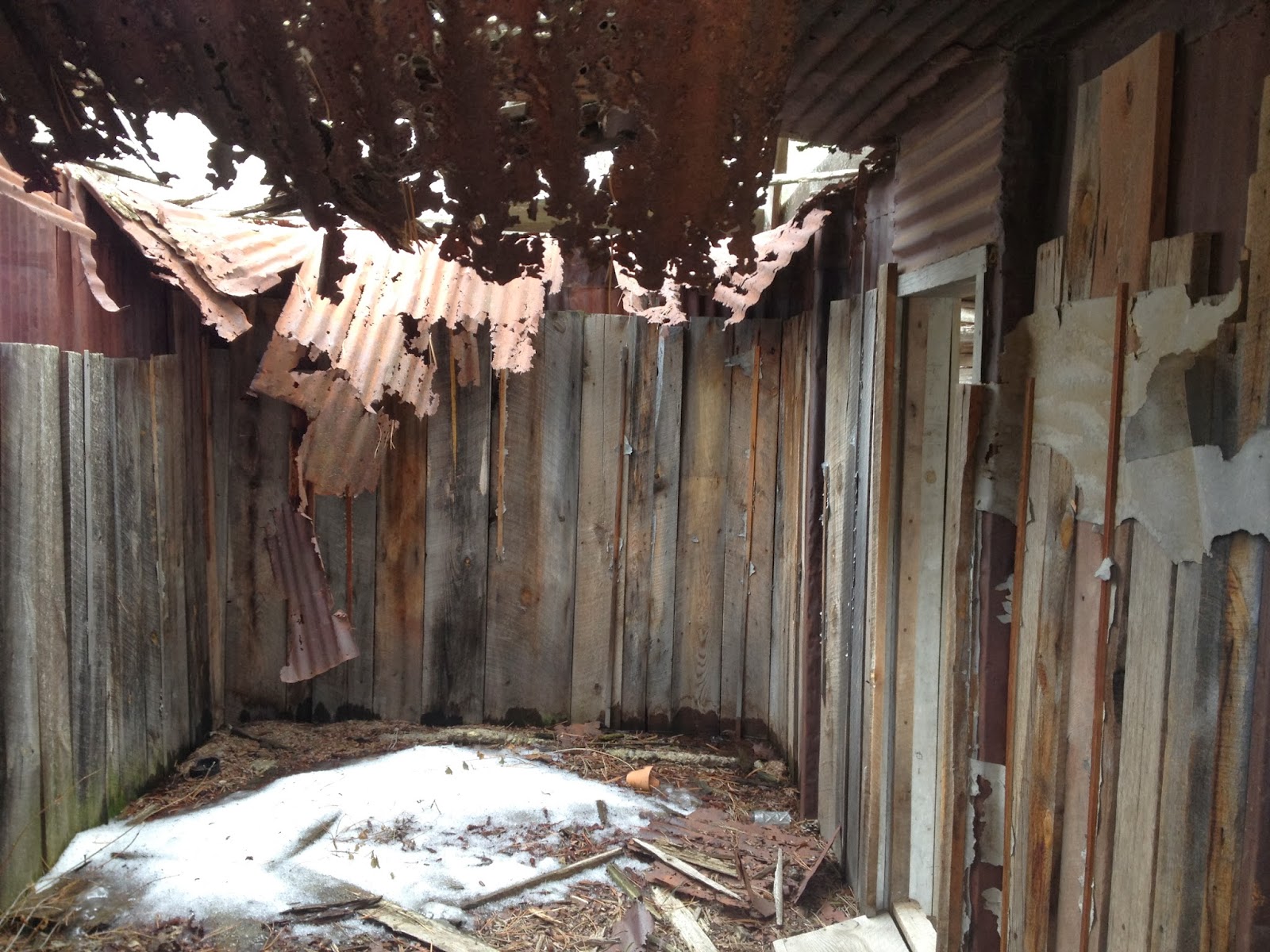 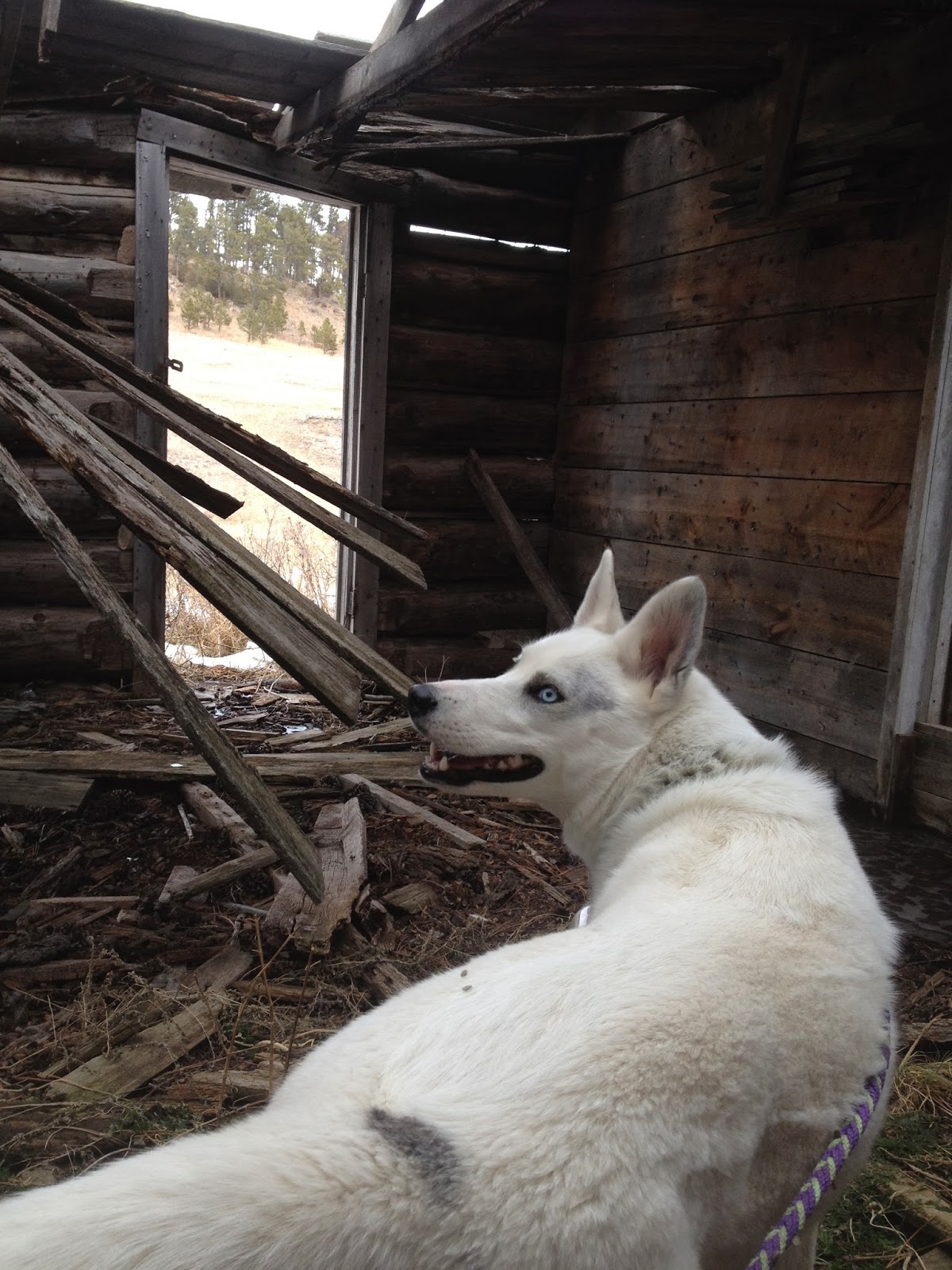 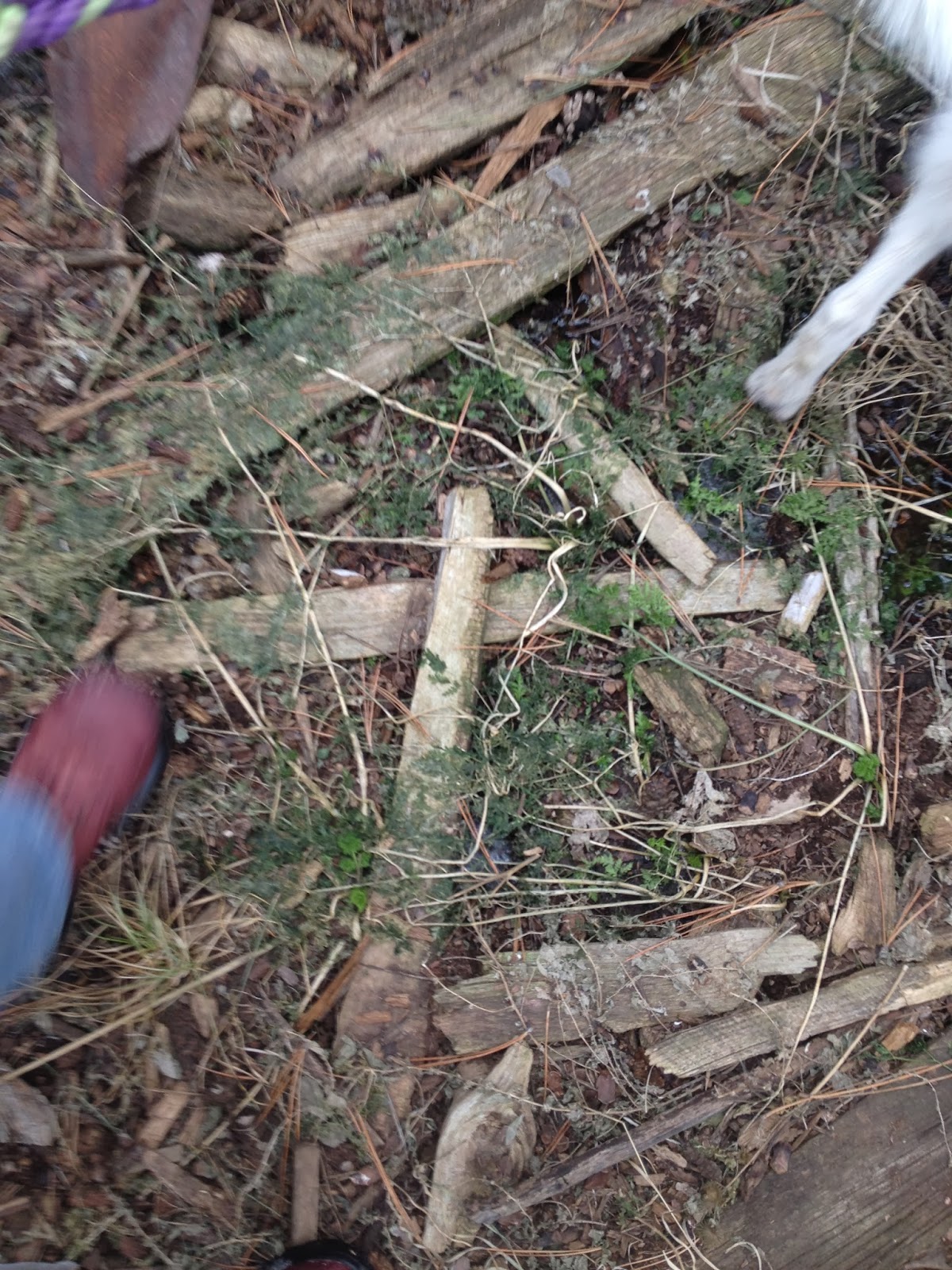 Corrugated metal roofing in the first room behind the main cabin has rusted to metal lacework.  The roof of the main cabin was made of wooden planks.  It has fallen in as well.  Small plants grow from the floor that once was the main living space.

The second added room is only about four feet tall.  Inside it are years- decades?- worth of pine cones.  If this was originally a food storeroom it appears the squirrels are continuing with the same purpose. 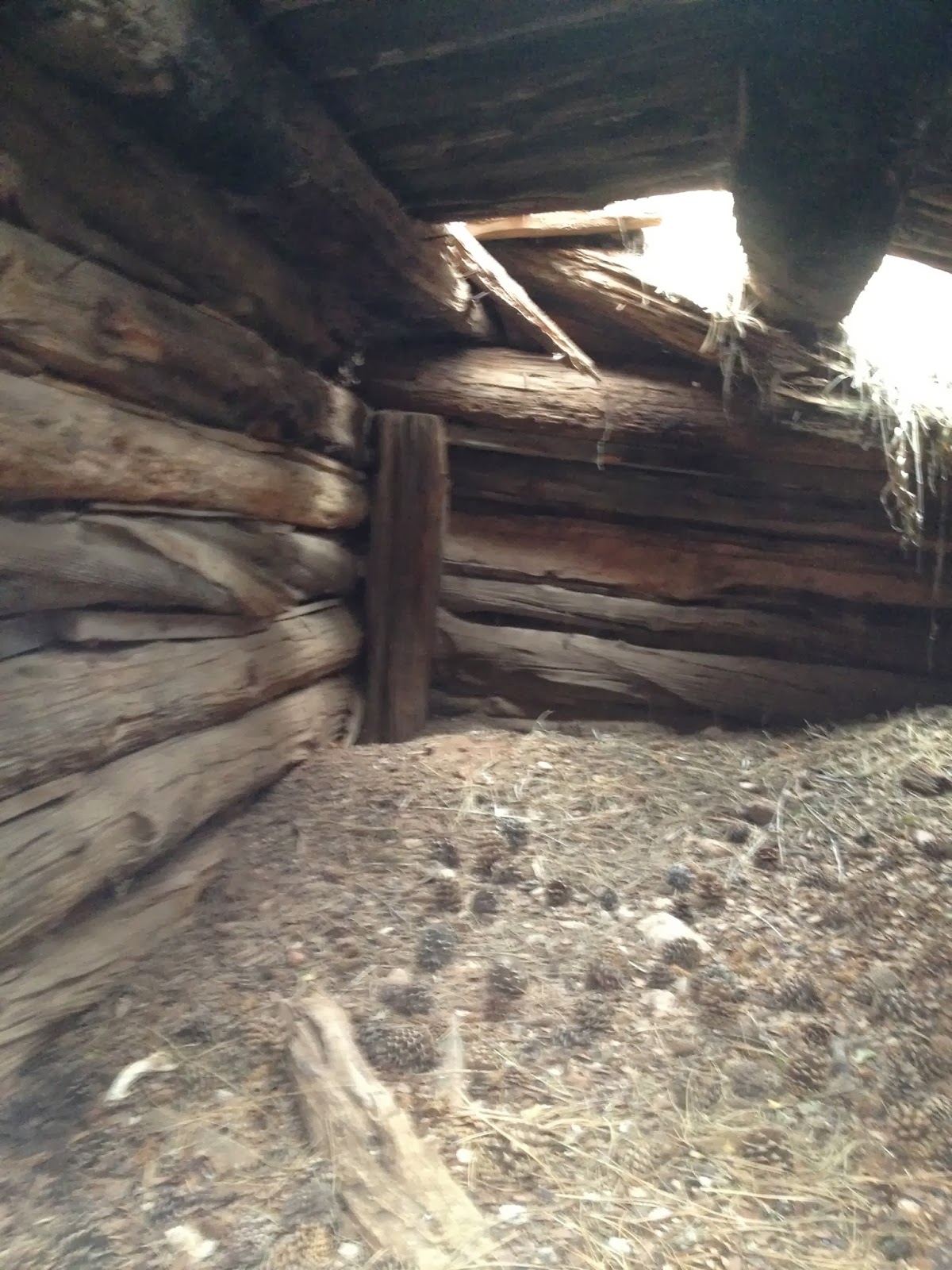 After visiting this fascinating homestead have been looking for information on prairie life and building.  Google has not been forthcoming.  The romance and hardship that peoples my memories may lead me to more research....Who homesteaded here?  Did the same family stay to build all of these structures?  Why did they leave? When?
In the meantime I will be rereading Laura Ingalls Wilder.

Posted by Unknown at 2:03 PM No comments: 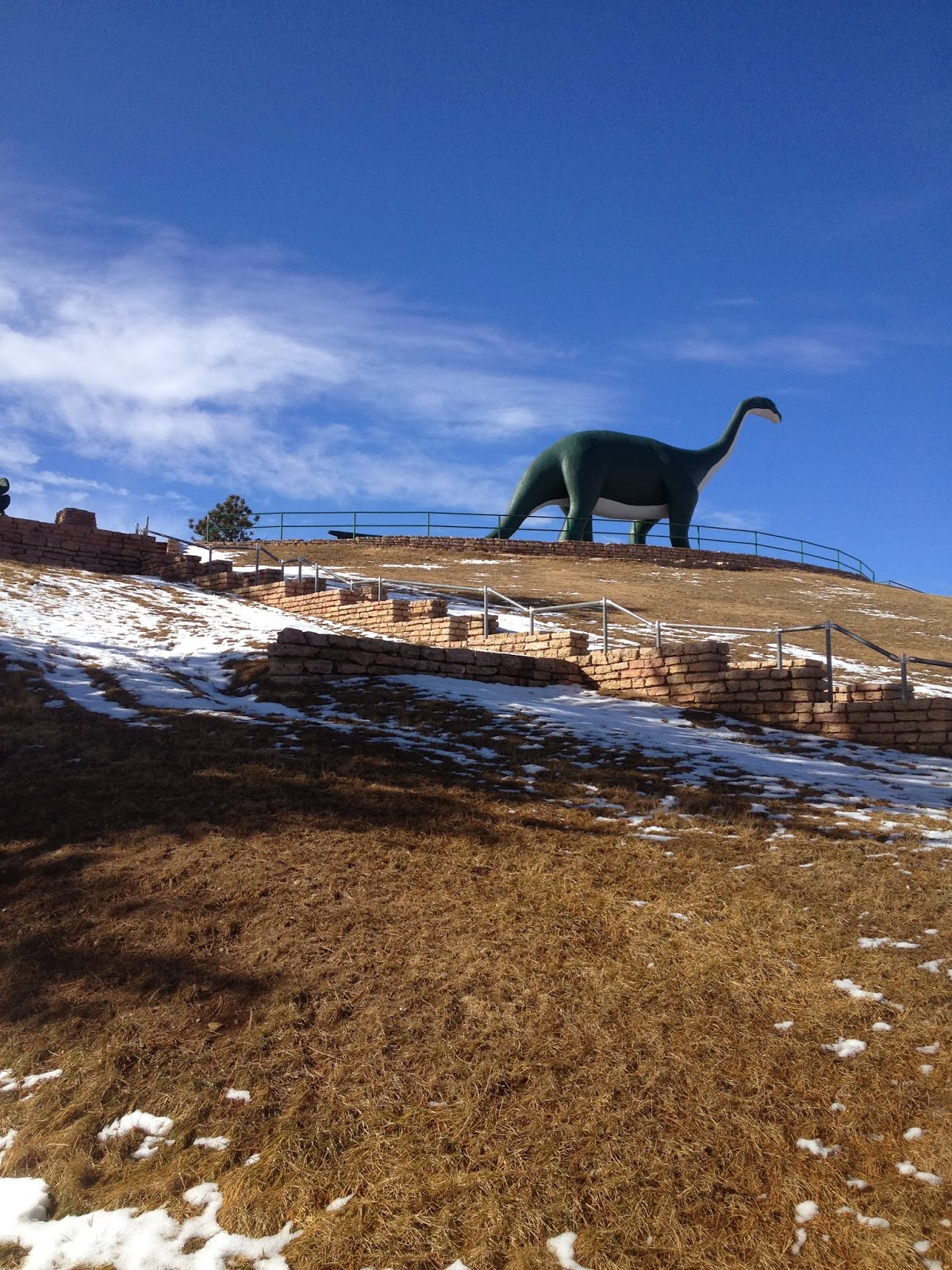 Here is an easy spot to visit. Right plunk in the middle of town. For groups that include small children it is a great choice. No entrance fees. Plenty to see and experience, but you are never too far from the car or lunch if the someone gets fussy. It combines kitschy americana with layers of history, science, and culture so it is worth going again and again. Easy to find, too 'cause it is marked by an 80 foot dinosaur visible from all over town.

This is a place we visited when we were kids, and now we take the youngest cousins- and the occasional kitten on a leash.  We have three generations worth of photographs of kids sitting on the same life size concrete dinosaurs. This is a park for families and tourists, but it also has the marks and memories of generations of teens and the eerie history of a frontier town overlaid with modern struggles to define a community.

Today Ash, Shadow, and I climbed the hill to take our own pictures. 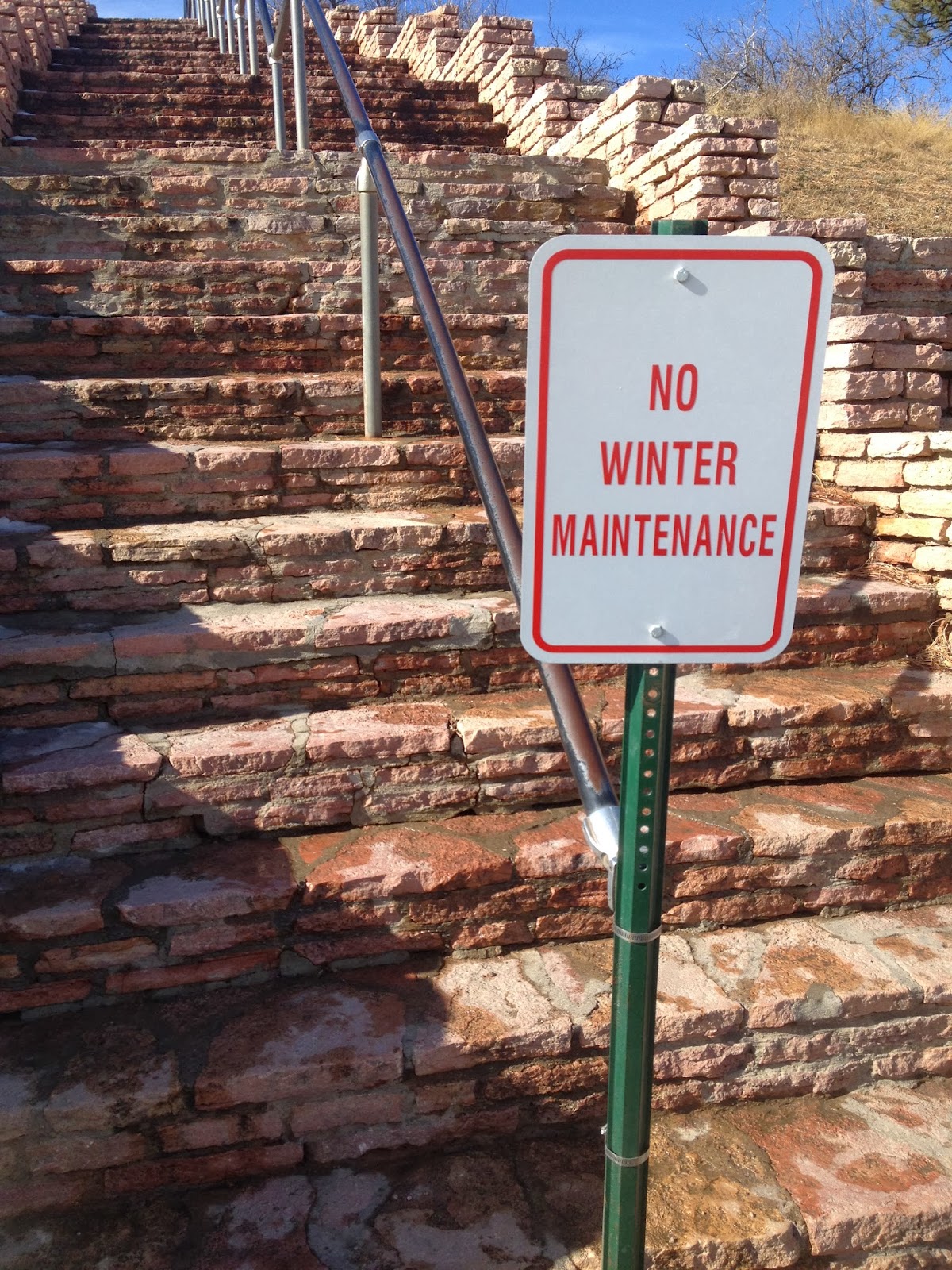 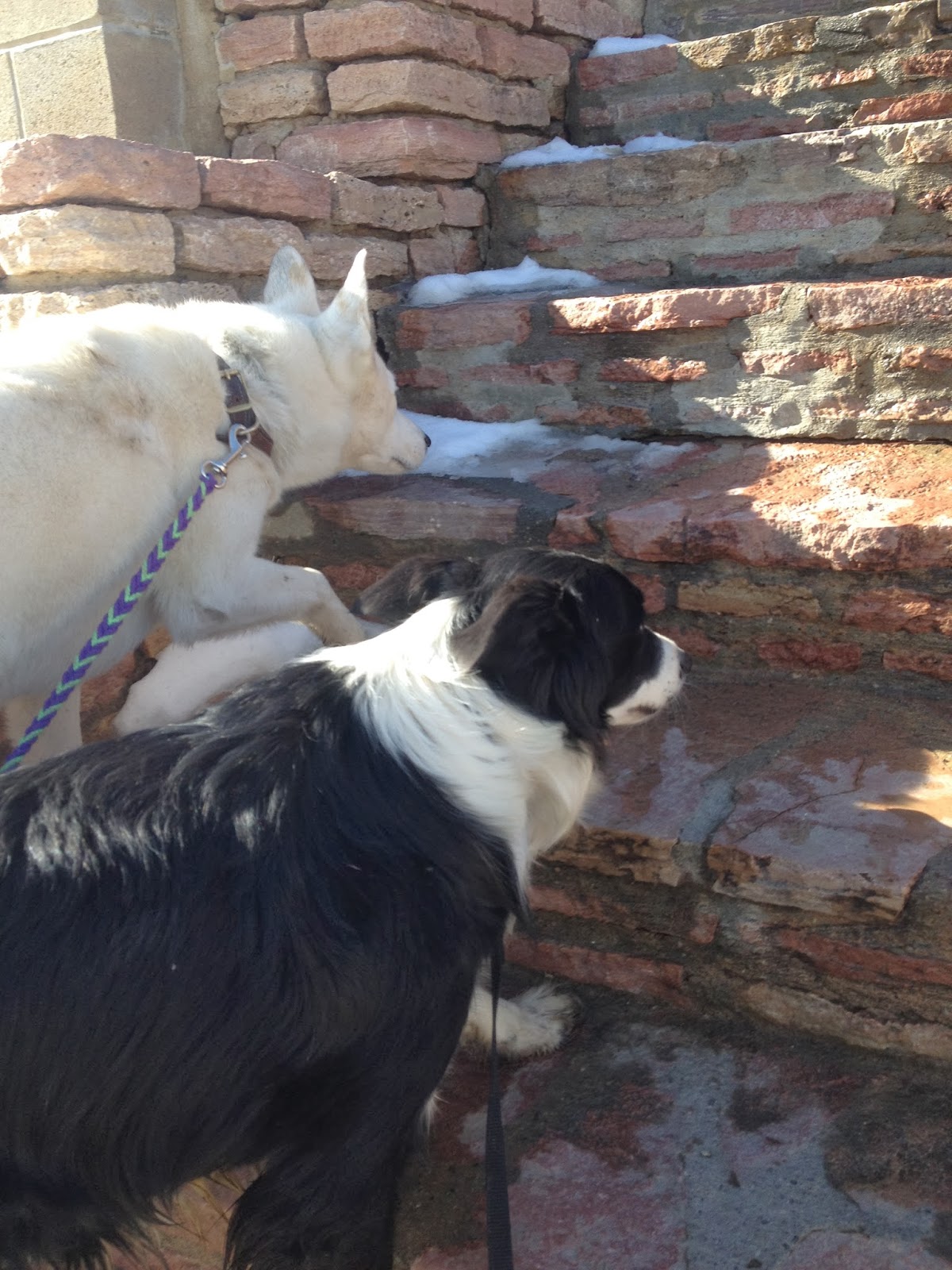 It has been sunny and warm so the lack of "winter maintenance" doesn't bother us too much- though my shoes were ill chosen.  Definitely time to get running shoes with a little more tread on them! 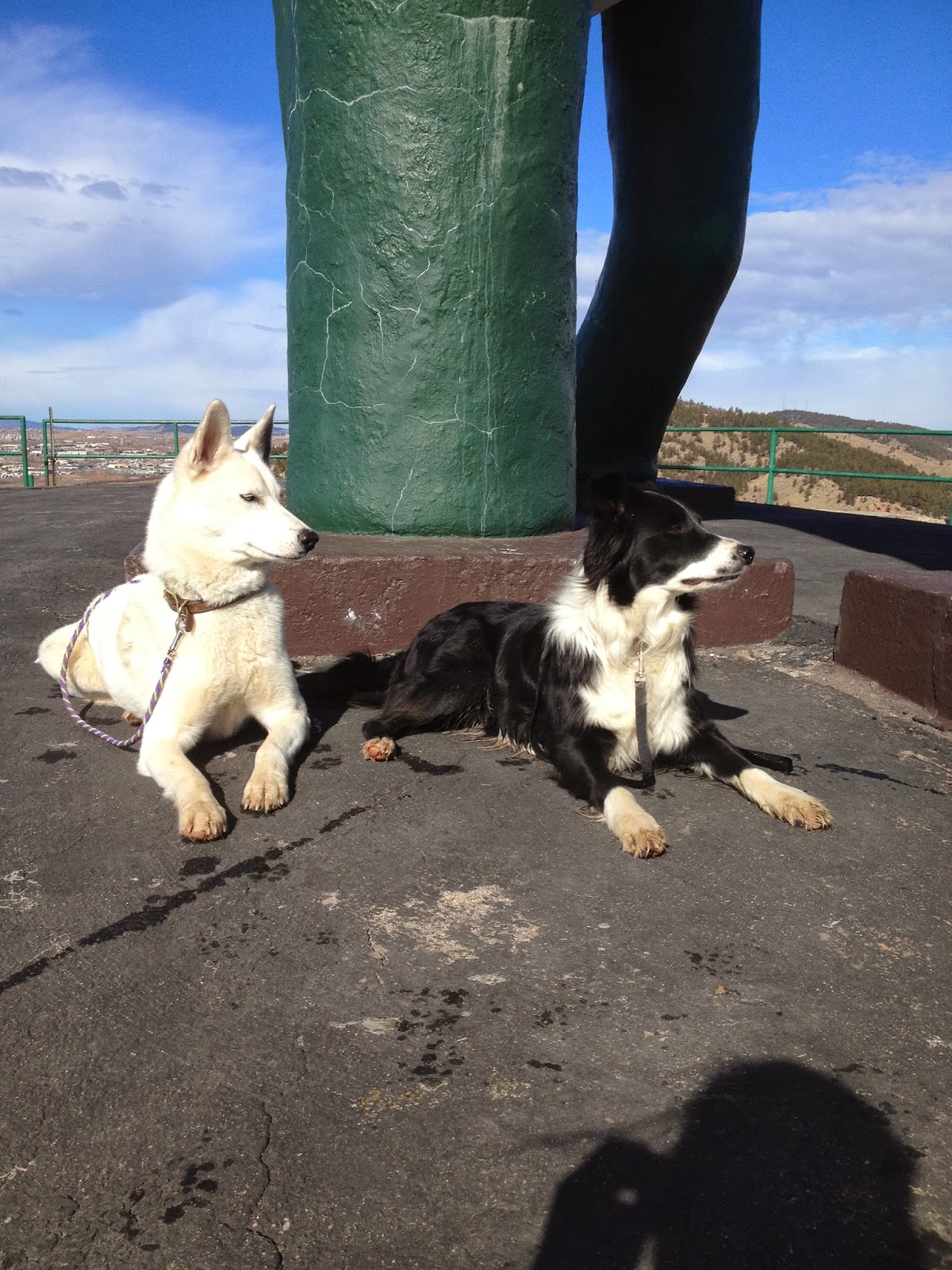 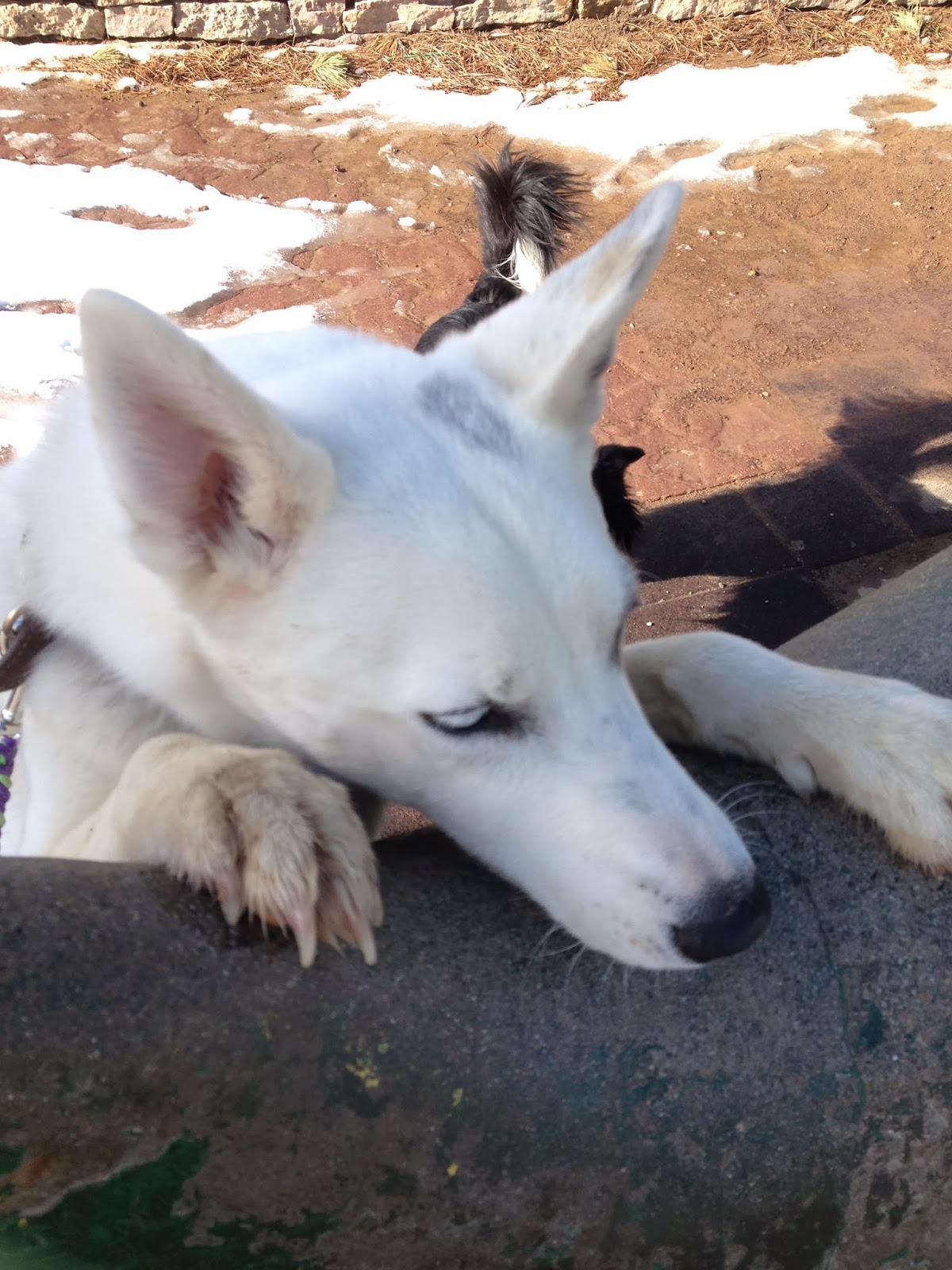 We got all the traditional pictures- sitting at the base of the bronto-oops, apatosaurus, climbing on the triceratops, and the handsome duckbill. 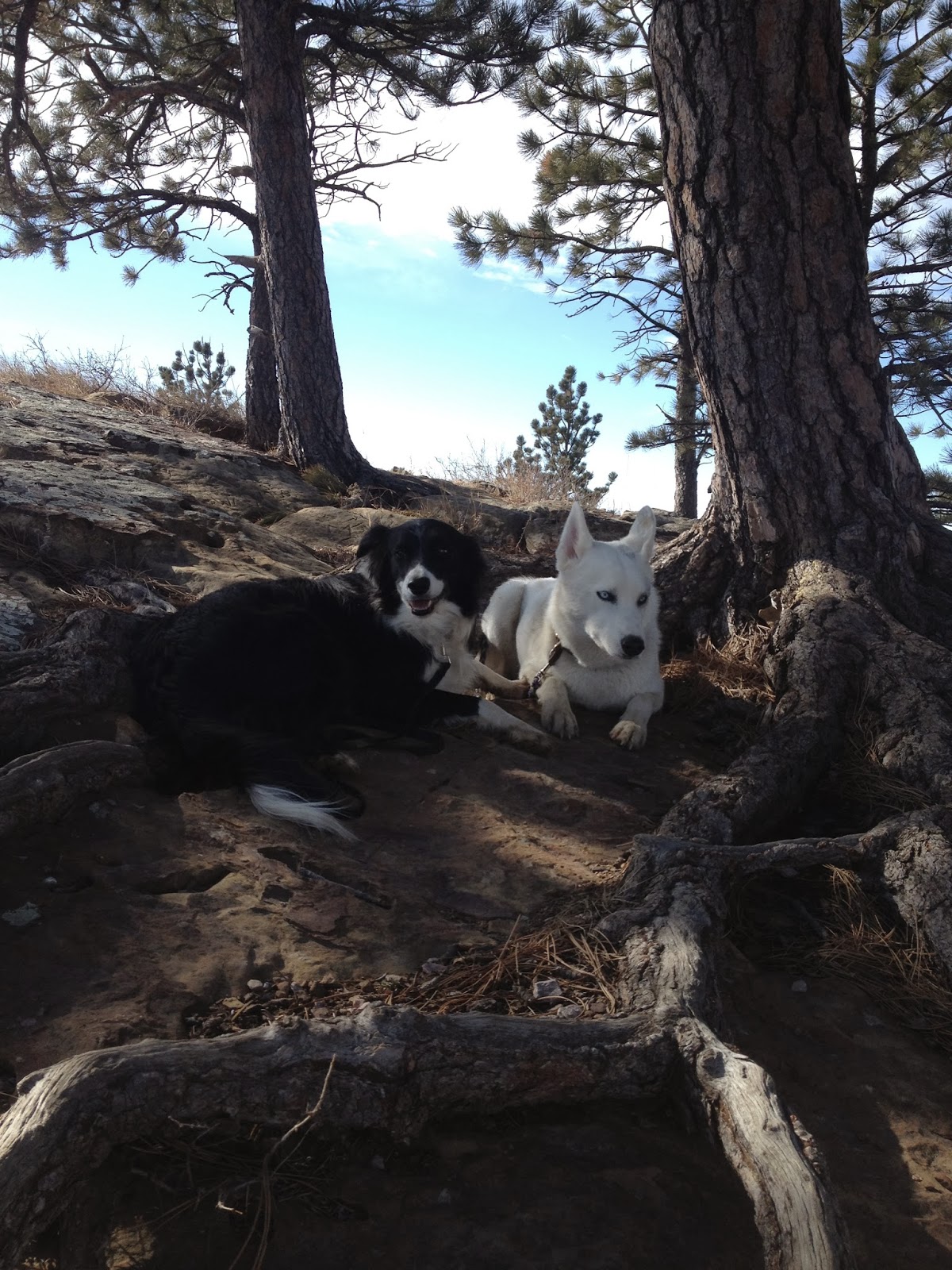 Then we spent some time exploring the trees and rocks and just looking at the view.

The rocks here tell their own kind of story.  How long have teenagers come here to carve their names in the sandstone?  I have memories of this.  So do my parents.  Were there kids coming up here for gently illicit adventures during the depression? 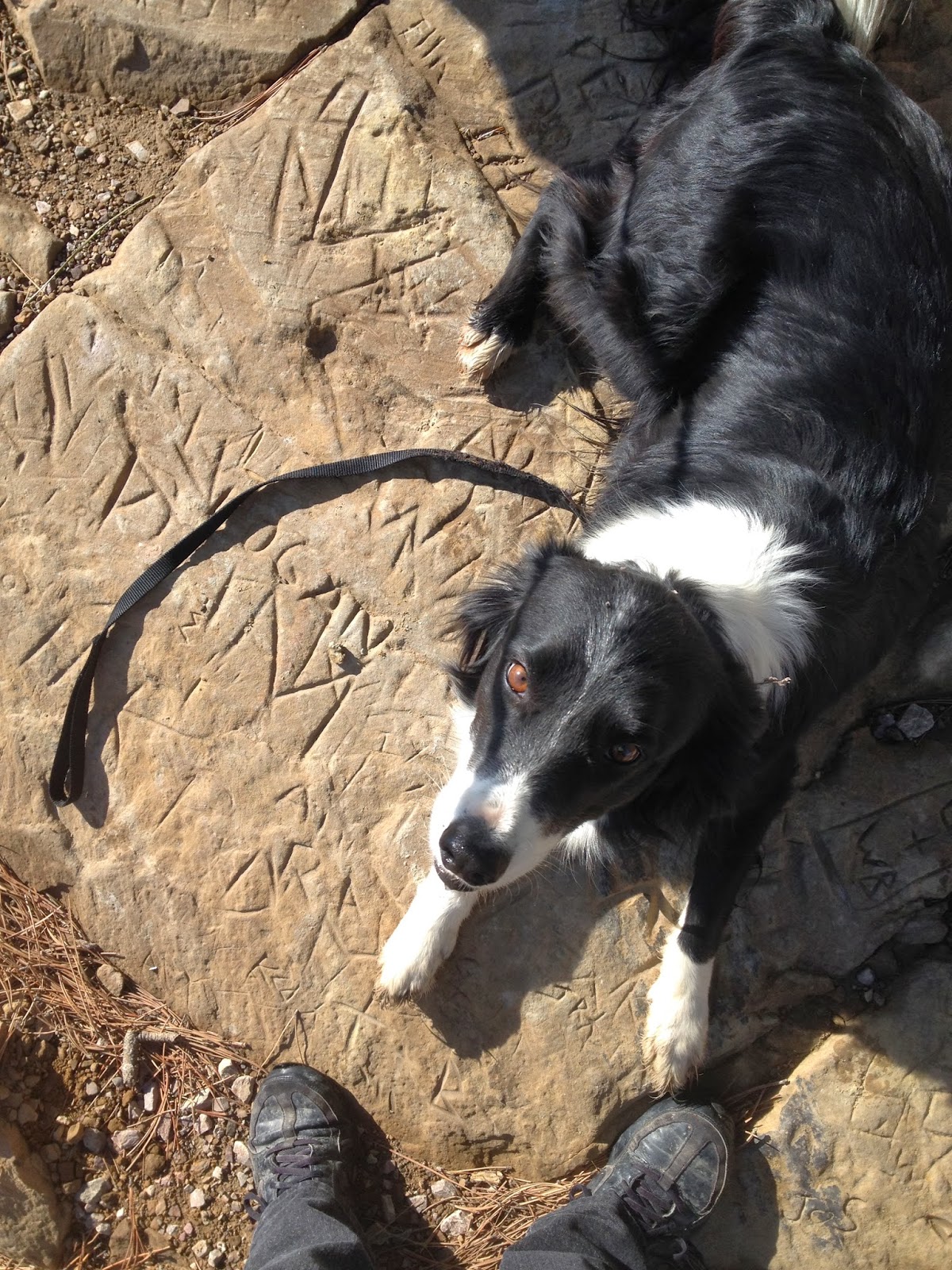 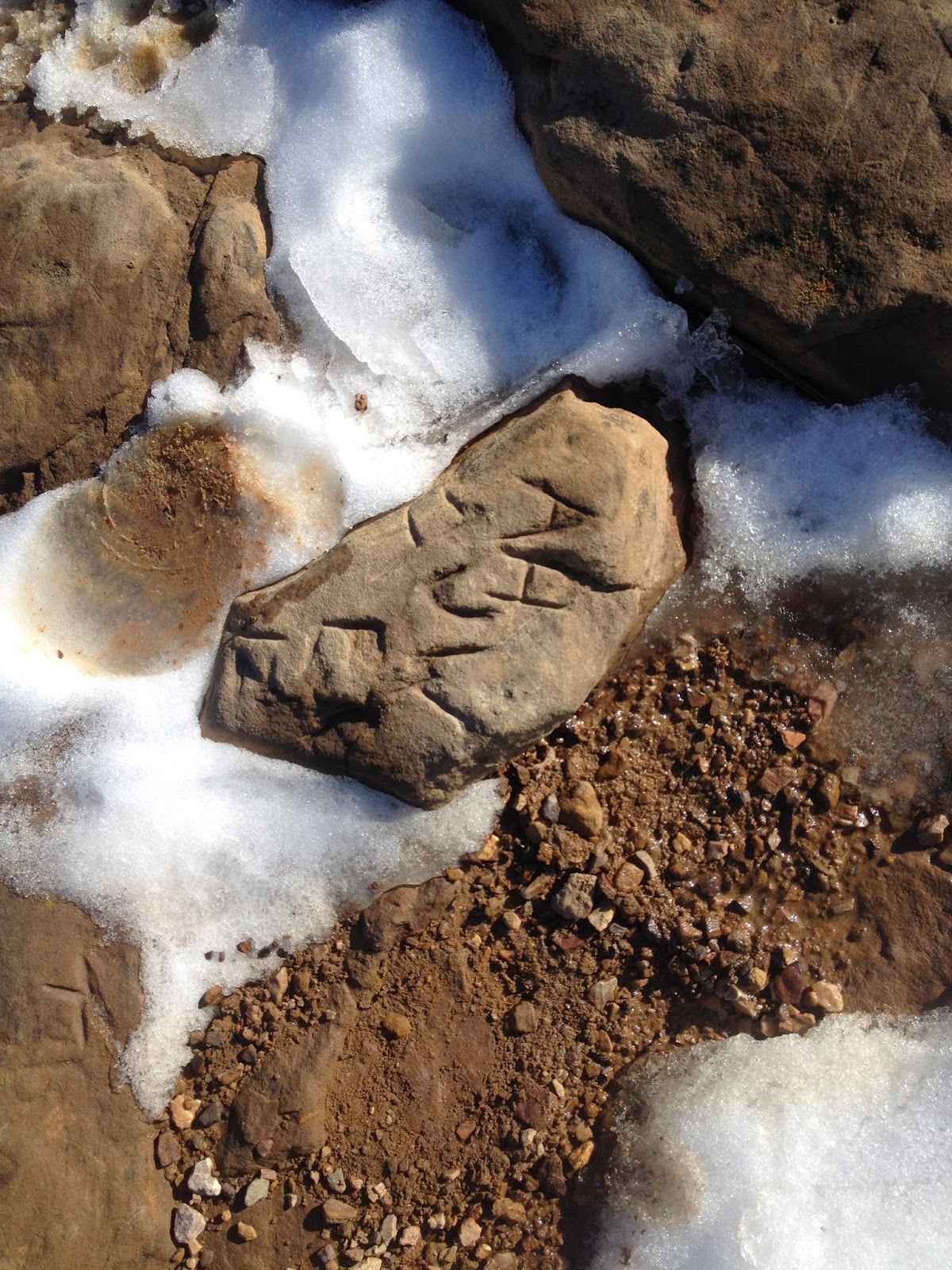 So many contrasts are visible here.  Shadow is standing a masonry wall that I walked on as a child. Beyond the railing is a faded much patched asphalt surface that follows the natural contours of the hill. The red tinted decorative concrete surface of the walkway has been added in the last decade and shows little wear. 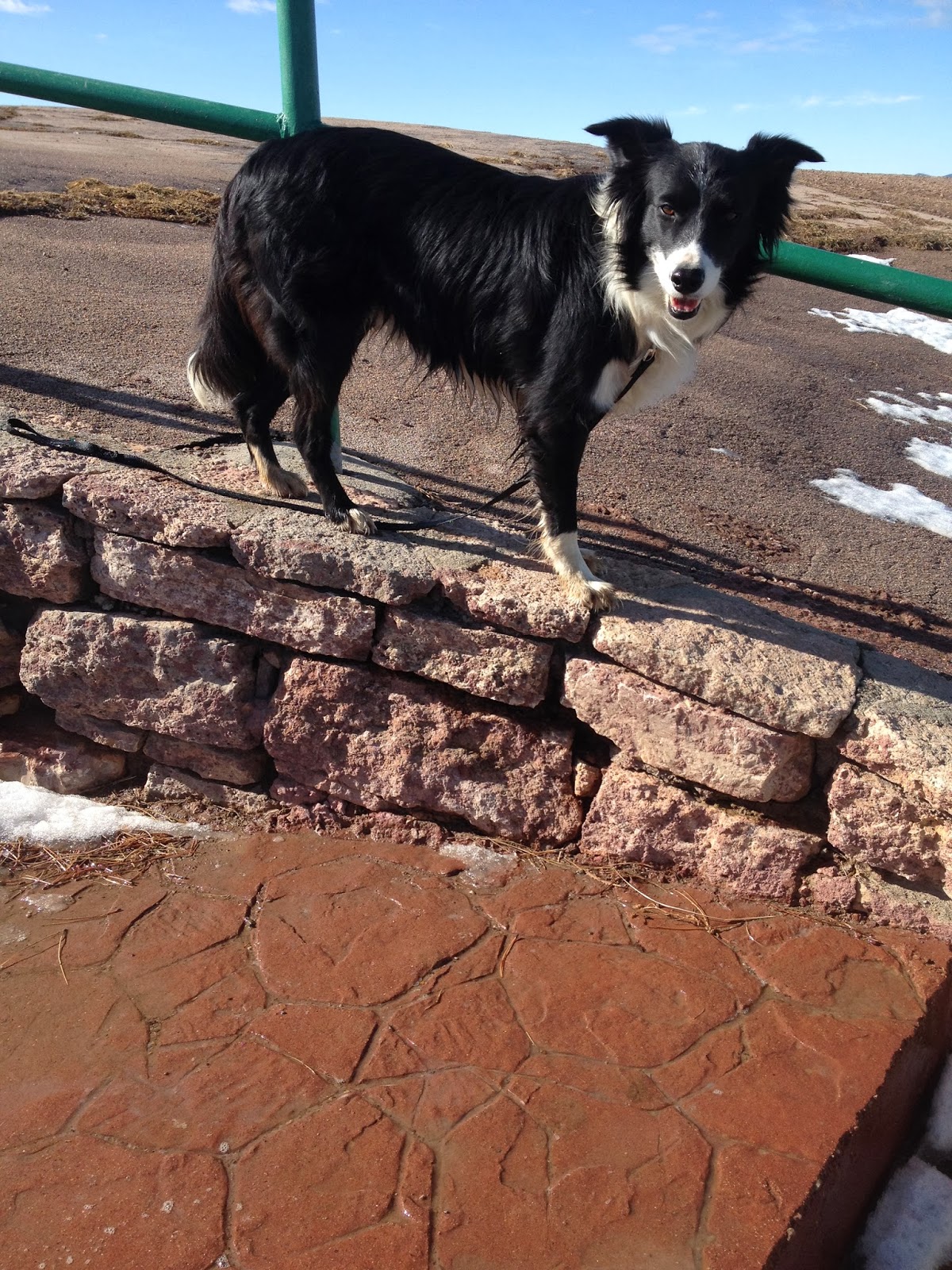 There is older, more violent history here as well. 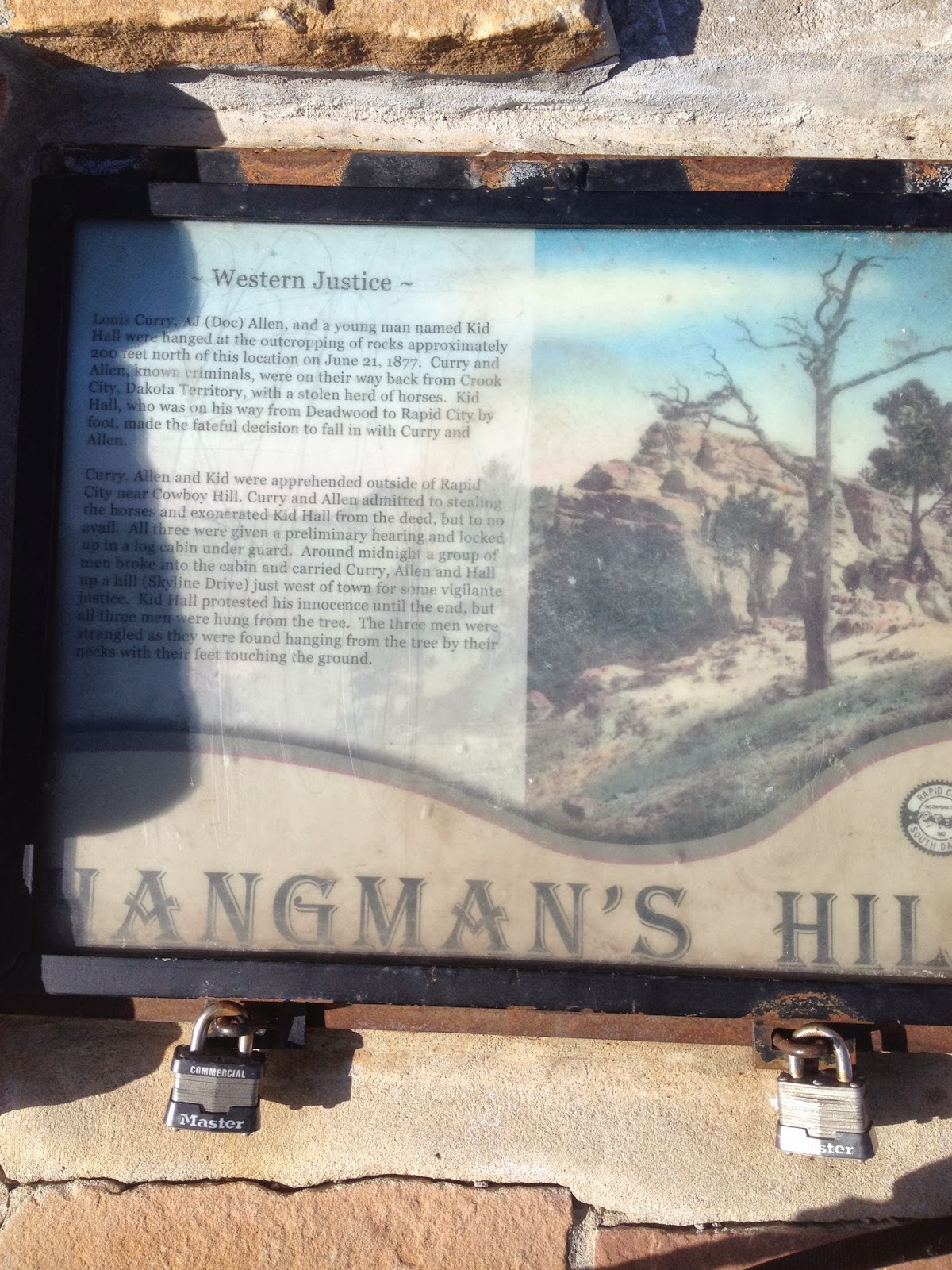 This plaque in the parking area tells how justice was served when Rapid City was a frontier town.  The artist's depiction on the plaque shows the tree and rocks that used to be a part of the our dinosaur hill visits.

Sometime in the last few decades this historic landmark- complete with hanging tree- mysteriously became private property.  Even though it is only a few hundred yards from the rest of the park the rocks were fenced off and a private home built.  Now instead of climbing the rocks and telling chilling tales of frontier justice we are greeted by hostile signs and iron fencing.  The familiar hanging tree and rock lookout are still there, but we no longer have the right to touch this piece of history. 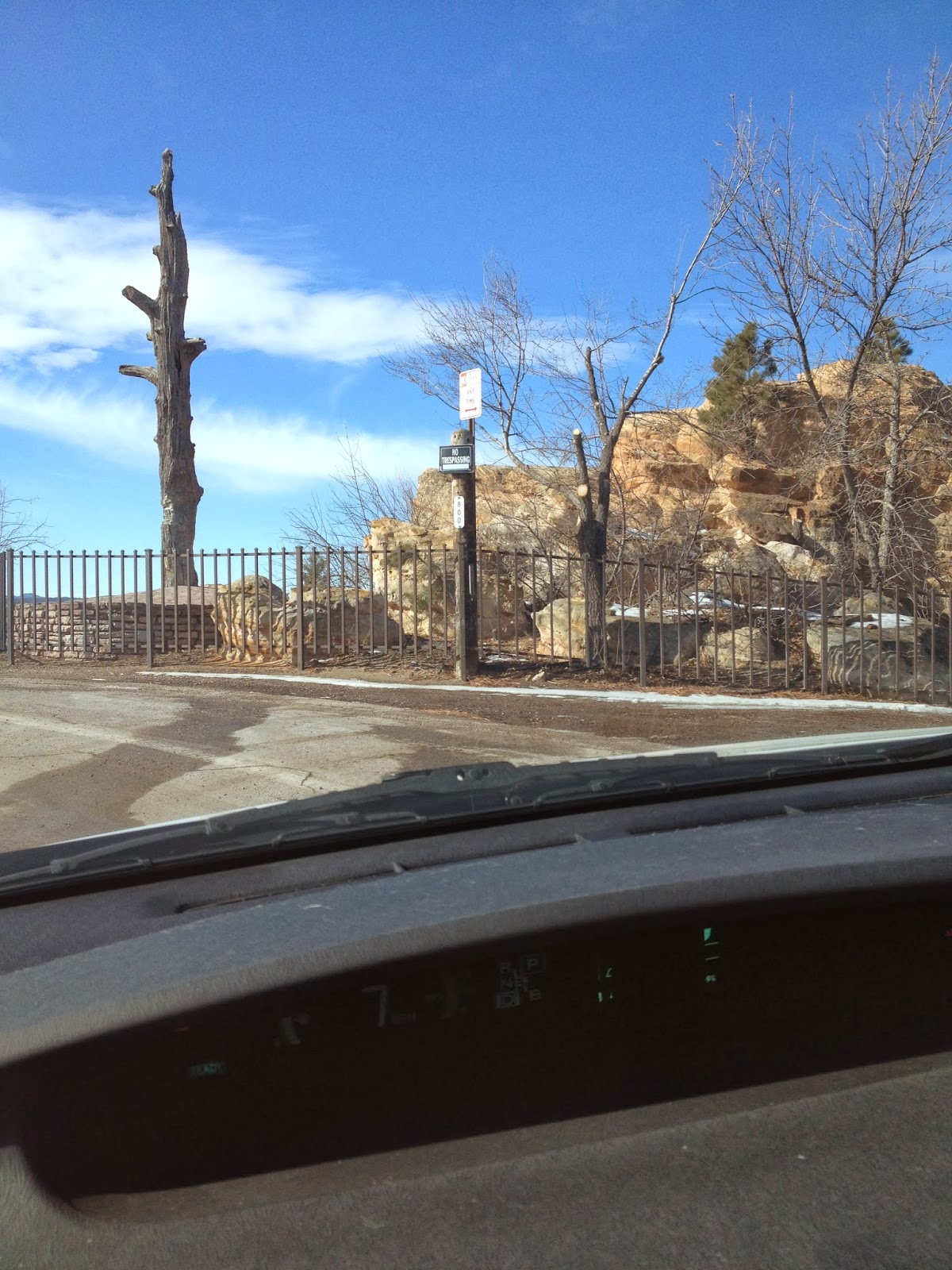 It looks like I am not the only person who was upset by this.

I like to end my visit to Dinosaur Park by driving along Skyline Drive.  This crumbly narrow road is an adventure to drive- or to jog.  You wind along the tip top of the ridge looking far down to the city on either side of you.  It is a lovely drive that appeals to something deep inside.  The last few years I notice signs all along the drive indicating a wilderness area.  This seems odd given that you are in the center of the second largest city in the state of South Dakota.  I did a bit of research and sure enough there is a good story behind these signs.  The fencing off and privatizing of city landmarks appears to have offended quite a few of us.  A group known as the Skyline Drive Preservation Group purchased 160 acres at the top of this hill to keep it from being developed the way Hangman's Rock was.  They donated it to the city in 2006.  While there are quite a few houses up here, there is enough empty land to keep the eerie feel that makes this such a favorite area to explore.  I don't know who the members of this preservation group are, but I can't help feeling I have found kindred spirits here!

One other favorite spot is a stone that marks a death of another kindred spirit.  A small turnout along Skyline drive beckons me to stop and look out to the west.  Standing here you can see the west side of town laid out like a map and the Black Hills stretched out behind. 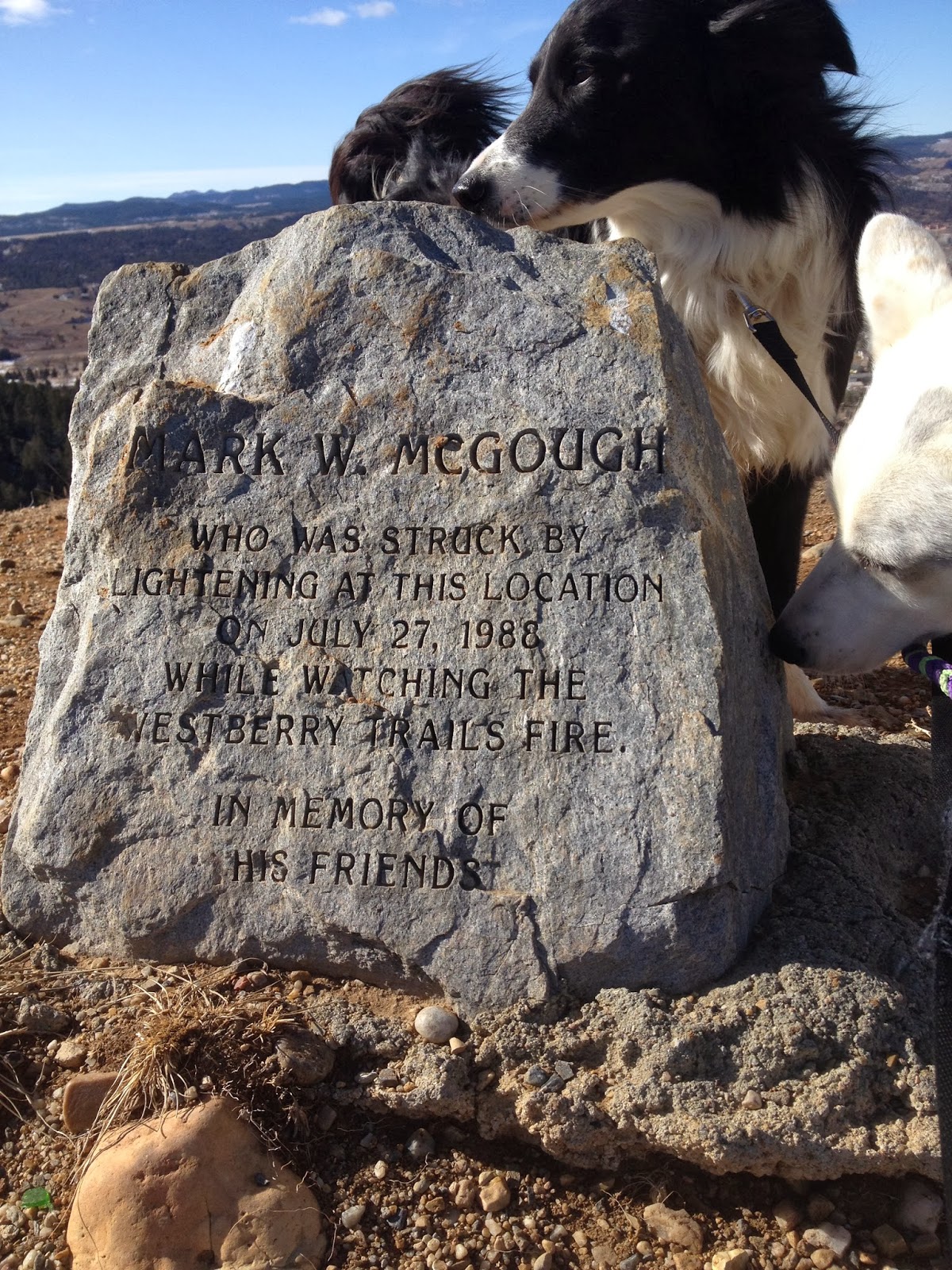 The story on this stone is of a man who came here to get a view of a fire that was threatening hundreds of homes.  It was known as the Westberry trails fire.  This was the worst of a series of fires started by an arsonist in 1988 and this high vantage point must have been a spectacular place to watch the fire.  The problem with high vantage points is that they attract lightning, something which we are all aware of yet often choose to ignore...Mark Mcgough lost his life in a lightning strike that day.  The fire was put out with only 15 homes destroyed, and the arsonist was never found.

Today was sunny and warm with just enough wind to bring scents to the dogs.  Our visit to Dinosaur Hill and Skyline Drive was satisfying, especially as the ever changing South Dakota weather brought grey clouds and sprinkles soon after we returned home.

2013: Journey from the Mojave Desert to the Black Hills of South Dakota

There are four of us.  We started out in the desert near Las Vegas.
I have been working with showgirls at night and training dogs and horses during the day.
The other three are dogs.
Border Collie Shadow,
Husky Loki,
and mischief maker Ash.
These dogs have been pulling, herding, practicing for agility, nosework, and obedience competition, teaching classes, and keeping me company.  A fun and busy life for all four of us.

I didn't have a lot of time for art but I got a few pieces done each year.

With a dozen beautiful horses to choose from, grey arab Destiny was my special horse from the time she was two years old.  I practiced Equine Massage, Saddle Fitting, learned riding and vaulting, and helped to develop rider training and balance classes as well as learning everything I could about horses and how they work. 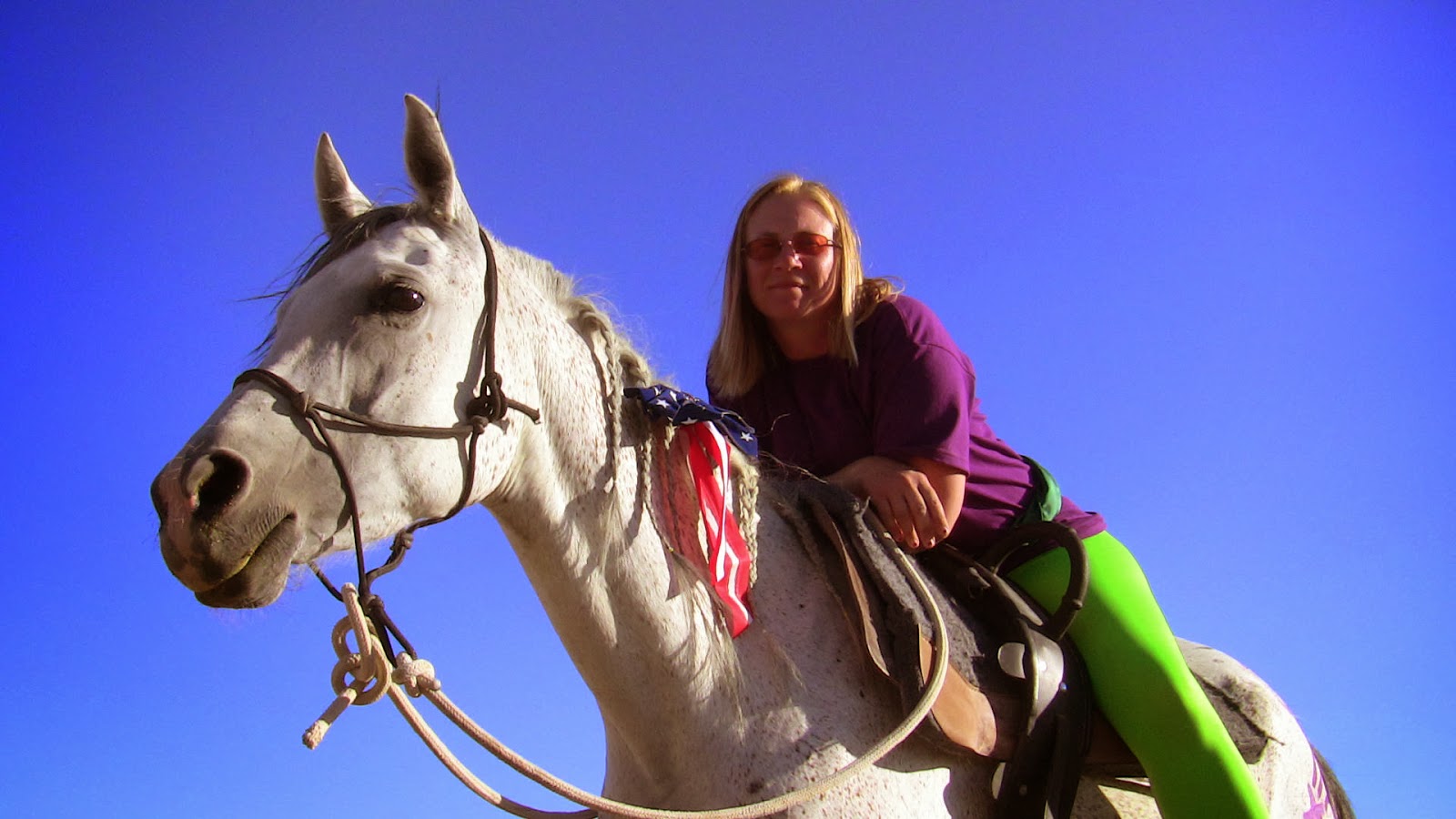 2013: time to start over.
I thought about what I wanted to do and where I wanted to be. The one place that fit was the Black Hills of South Dakota. I grew up here and never got to explore the way I really wanted to.  The hills inhabit my dreams and my map of them has huge gaps.  I still have family here and feel a connection with the land.  Fun things have been happening in the nearly twenty years since I have been gone.  It seems like time to come back and explore!  I said sad goodbyes to Destiny and her herdmates, and to the dogs I had to leave behind, then packed up my belongings and three dogs set out across the country. 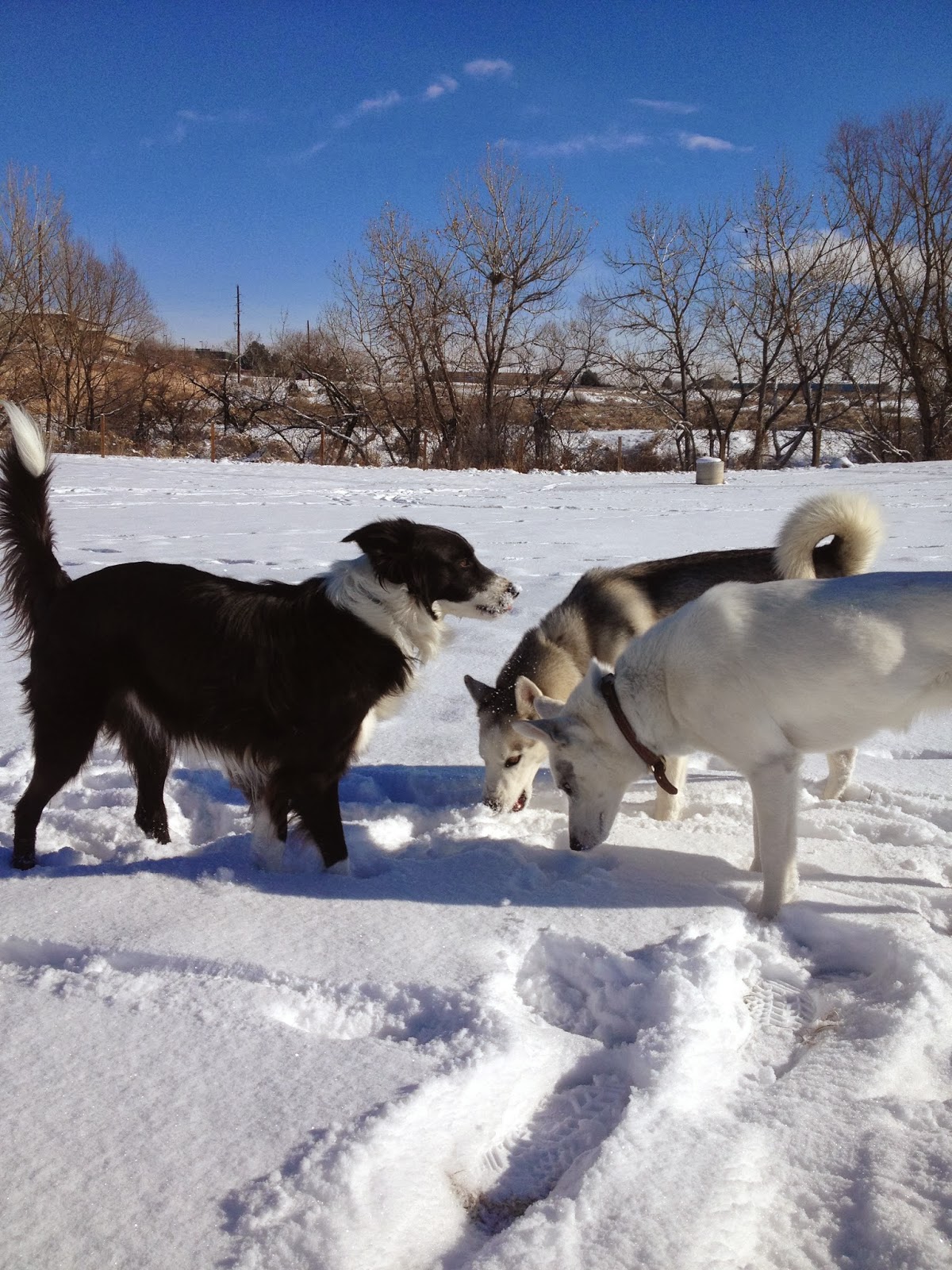 Desert raised dogs were very happy to see snow- and look!  you can eat it too! 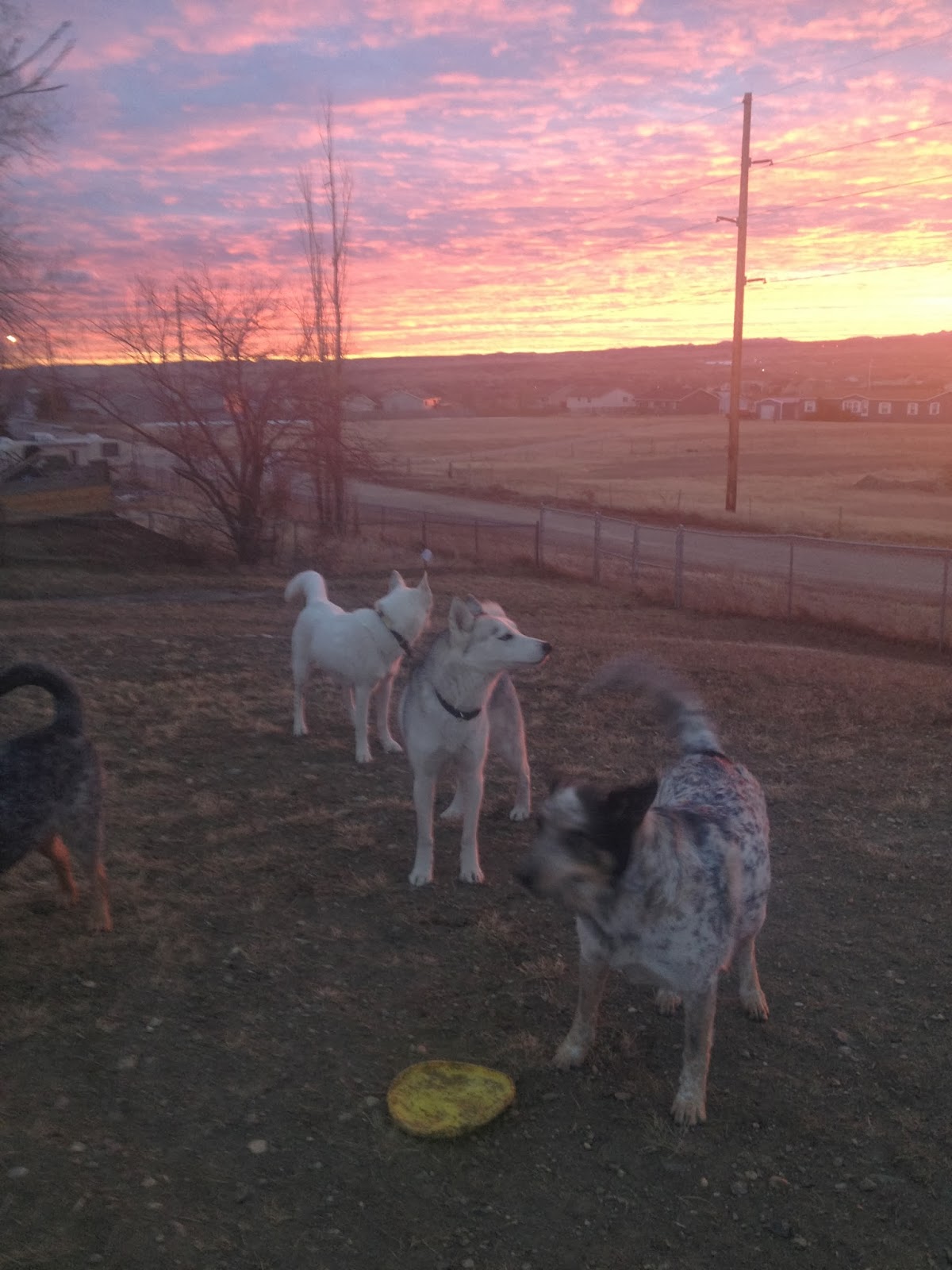 New artwork is being inspired by the places and animals I see
I invite you to follow me as I explore the land, people, and animals of the Black Hills of South Dakota!