On a mission to find artist David Uhl at Sturgis Rally

Today I am going to find artist David Uhl at the Sturgis Bike Rally. From his Facebook feed I know he is set up in the Gold Dust casino in Deadwood. To get to this town I have to drive about ten miles past the epicenter of The Rally so it is going to be an adventure all the way!

If you have not been in the Black Hills during the Sturgis rally it is hard to picture the effect it has on the entire area.  This time of year in the Black Hills Harleys often outnumber the four wheeled vehicles on our roads. Hundreds of thousands of people come to the Rally. The buzz and roar of Harley engines is everywhere and the streets are filled with sunburned people in leathers that have been riding, camping, and partying for a week or more.

This is the perfect backdrop for the art of David Uhl. I started following him on facebook earlier this year after a friend posted one of his paintings to my timeline.  His paintings feature Harleys in scenes from american history, and he manages to imbue them with personality and passion that are hard to find anywhere in the art world. I want to meet him and see his work in person!
Wednesday morning, right in the middle of Rally week, I set out in my trusty Prius.
My trip from Rapid City to Deadwood took me right past Sturgis and through ten miles of winding canyon to Deadwood.  This is  the old west town turned modern gambling hub that is featured in the HBO series called Deadwood.  This part of the journey, especially with thousands of motorcyles sharing the road, was quite an adventure.  My attention was more on getting there than on the exciting scene so i did not take photos for you, but next year this should be the subject of its own photo blog, the drive was that impressive. I kept driving right through the great festival that is downtown Deadwood and parked at the Mickelson trail head.  The Mickelson trail is the Black Hills own Rails to Trails project, a hundred miles of graded bike path running all through the hills on the old railroad bed.  The trail head in Deadwood is located where a bridge crosses the creek. It is an oasis of calm after the chaos of downtown Deadwood.

The walk through town is surrounded by old stone and brick buildings. I decided to stop in at this one: 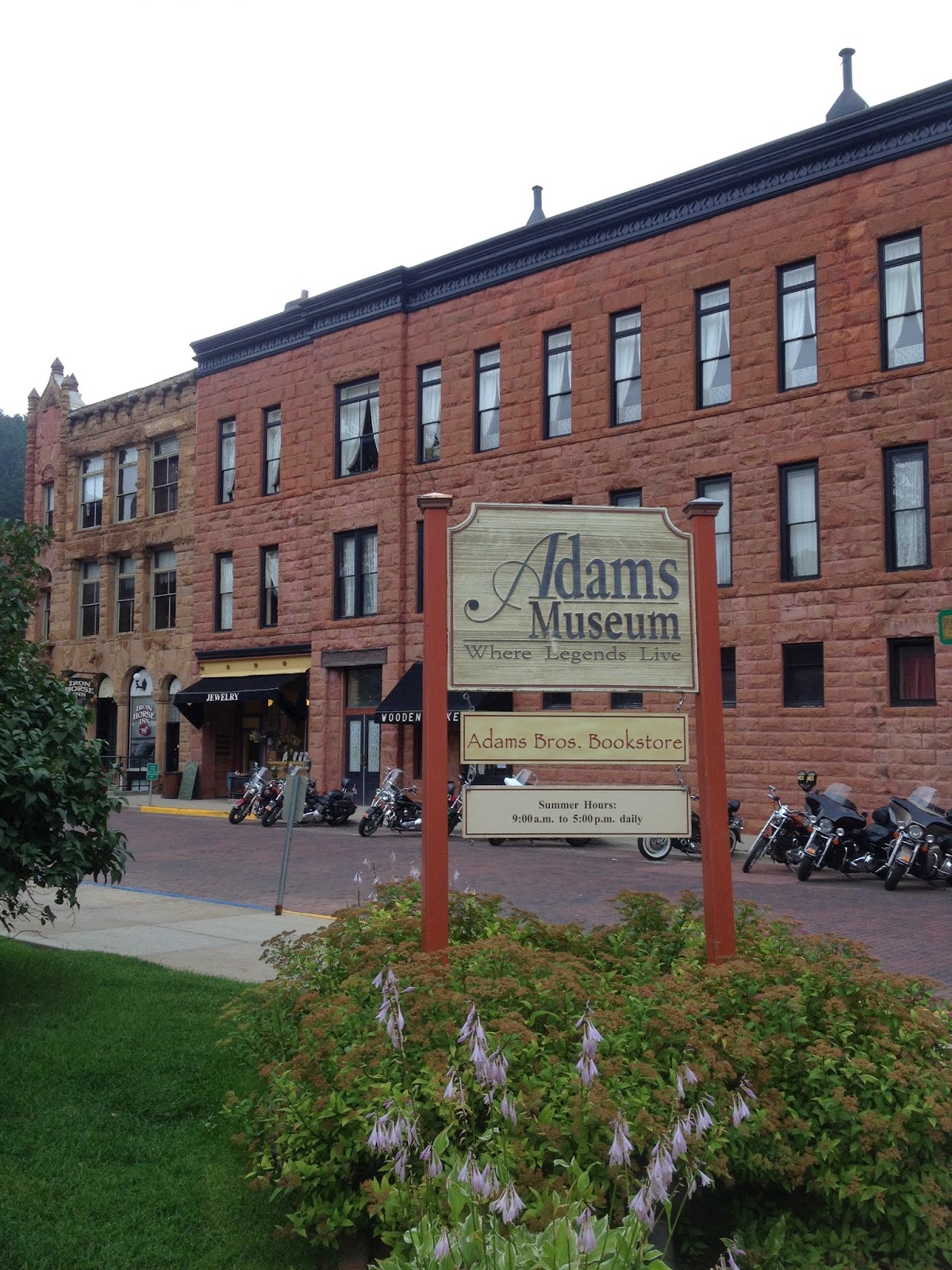 The Adams Museum is three stories of Deadwood history and americana in a historic building. The town was founded when US citizens flouted the treaty with the Lakota people to search for gold in the 1870s.  It quickly began to capitalize on its'reputation as a wild west town to bring in tourism. Things slowed down in the middle of the 20th century. In the 1990s the South Dakota constitution was changed to allow gambling and Deadwood once again began to bring in tourists with its' wild west reputation.  The Adams Museum tells the story of Deadwood with well designed displays and lots of historical objects.  The volunteers are friendly, but the real reason to visit is that it gives you information about things you will actually see as you walk through the town.

Around the next corner I found ,this great version of a coffee shop: 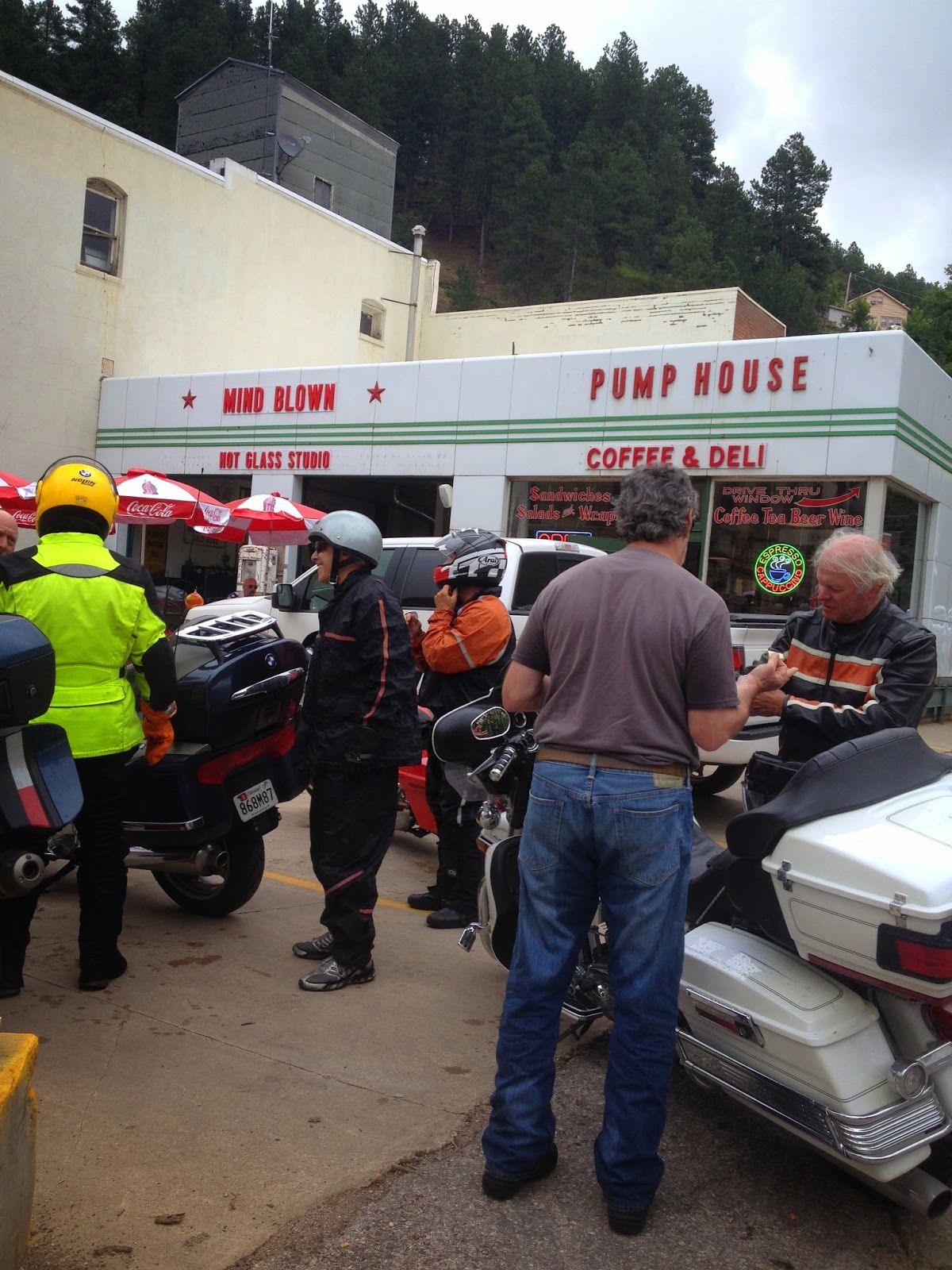 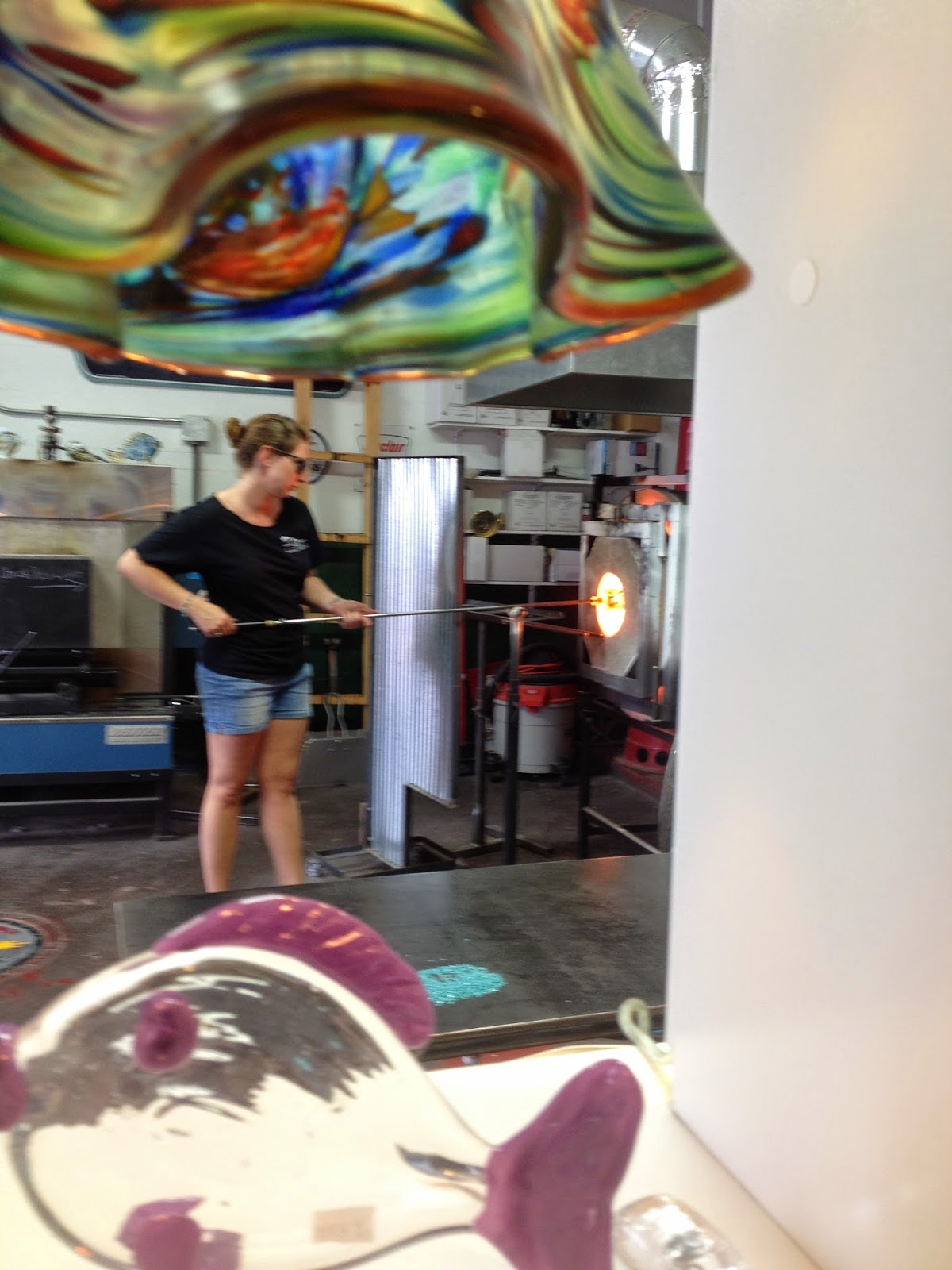 The Pump House is my favorite kind of business: locally owned and run with excellent food and customer service.  The building is an old gas station decorated with period signs and memorabilia so there is lots to look at. To top it off, the deli shares the space with a glass blower who was working at the furnace as I ate my excellent chicken salad sandwich.  They offer introductory glass blowing classes here.  This made me think of my step brother Aaron who started to learn this craft before he passed away earlier this year.  It would have been great to bring him here.

Just up the hill from the Adams Museum and the Pump House is the Mount Moriah Cemetary.  You can take a walking tour that includes the graves where Wild Bill Hickock and Calamity Jane are buried.  The personalities here are first class, but they are overpowered by the view of the hills and town. 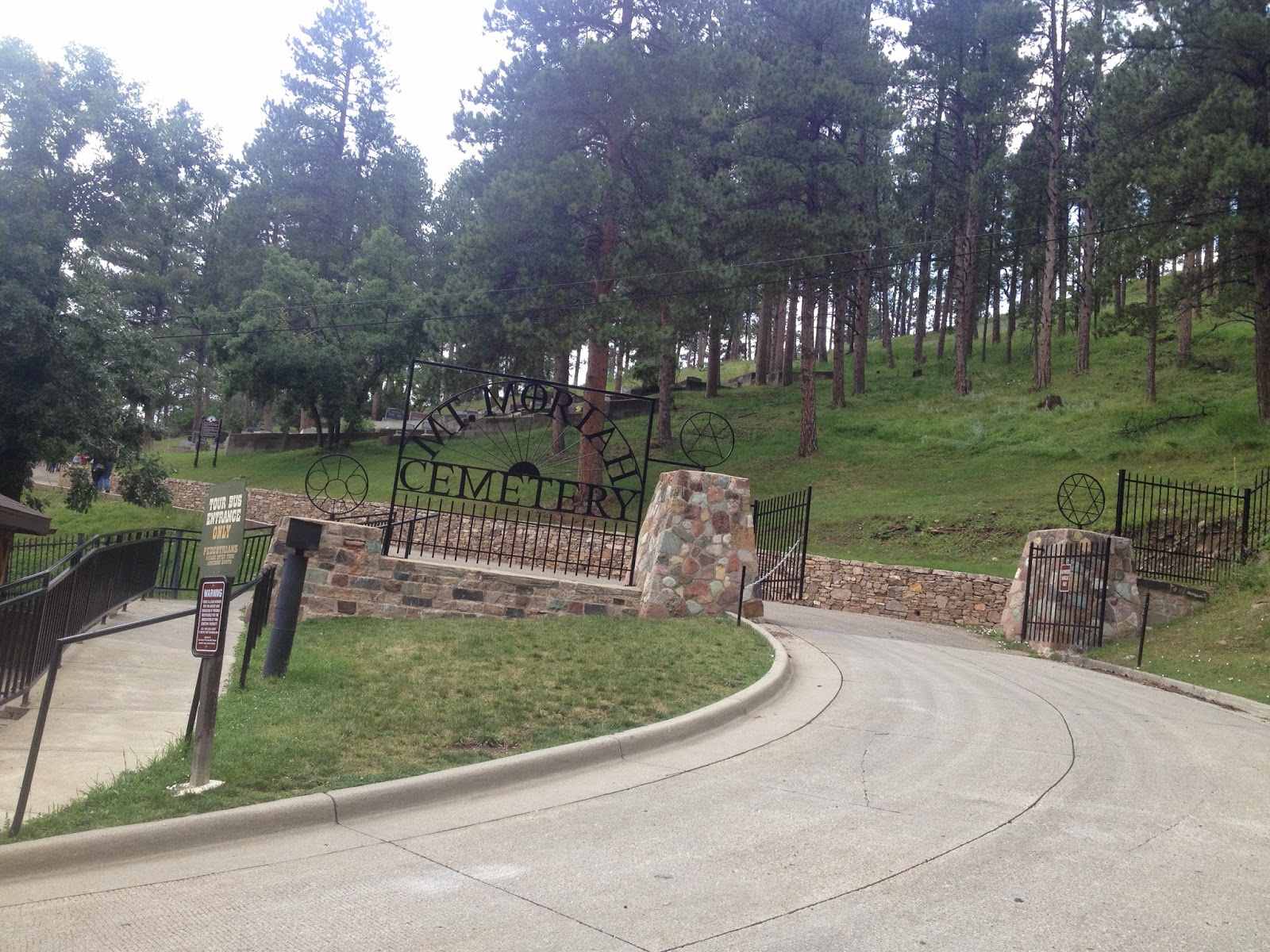 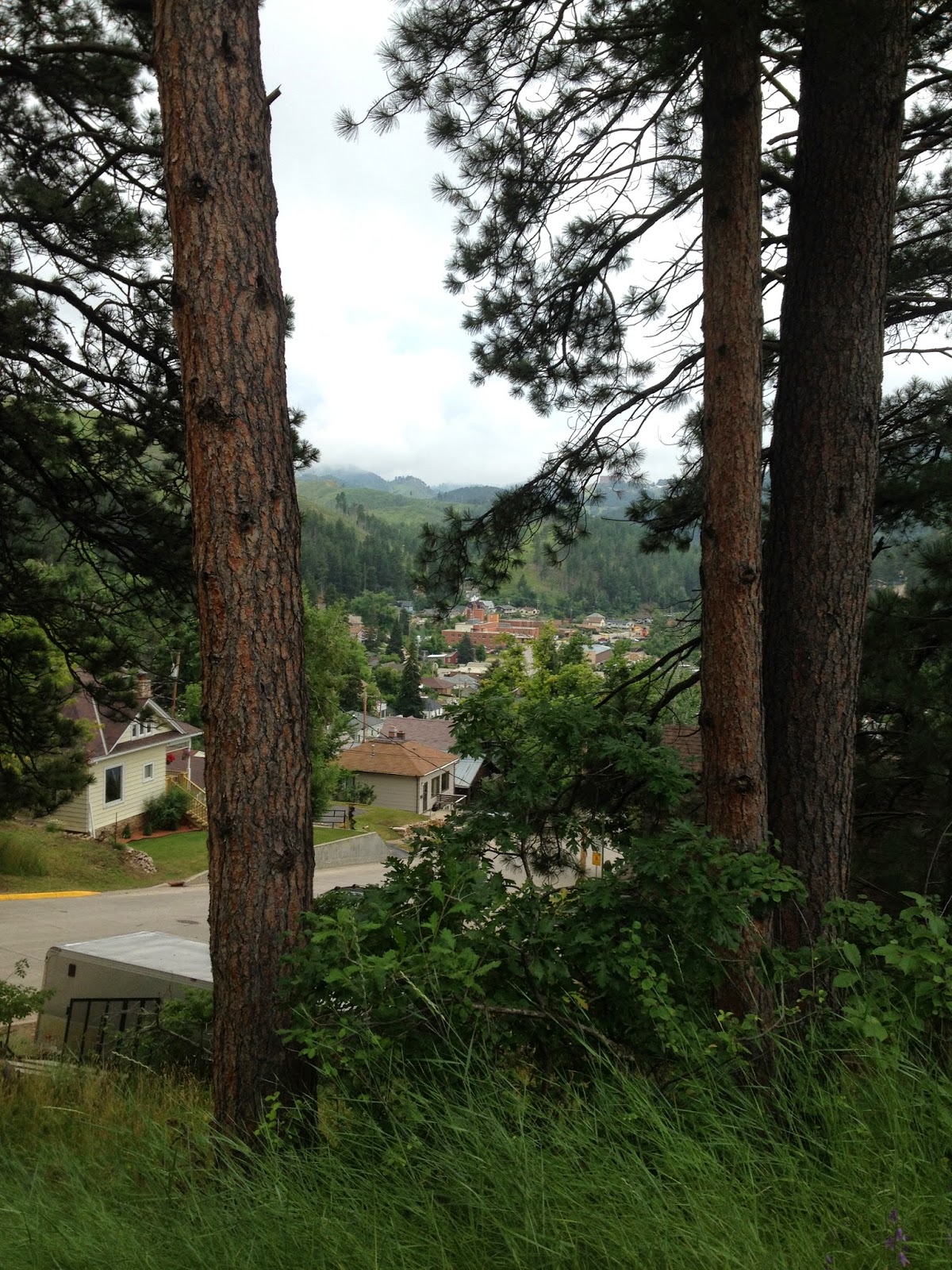 As I walked back to town from visiting Mount Moriah, a doe walked across the street in front of me.  She was unphased by the constant noise of motorcycles traveling to the cemetary.
The walk down the hill was a great time for contemplation.  I looked at the tree filled skyline and thought about the pictures of the founding of Deadwood, when the slopes were bare. The town was actually named because the trees here were dead.  I wonder why?  Was there a fire in the area in the years before the prospectors first invaded the area?  Or was there some tree disease like the pine beetles we are fighting now?  It is hopeful and inspiring to see how the trees grew from those bare slopes to make a majestic forest

My final destination, the Gold Dust Casino, was just a half block past the Pump House.  The street was packed with bikes and riders, the Deadwood tour buses were in full swing, and there in the window working on his latest painting, was David. To get the feel of it, check out this video he posted on his facebook feed this week: video of Sturgis exhibit

He donated a half dozen of his works to different charities that are doing fundraising at Sturgis this year:

August 5 · Edited
If at all possible try to make the Biker Bells auction/reception at the Chip today, meet Jessi Combs as she's there to help raise funds. I have a feeling you may get a smoking deal on this massive 36x48 giclee we have donated. retails for $4850.00 — with Carlos Alberto Guglielmelli Viglioni and 4 others.

I was able to pick up this fun book that shows his work and tells a lot of stories: 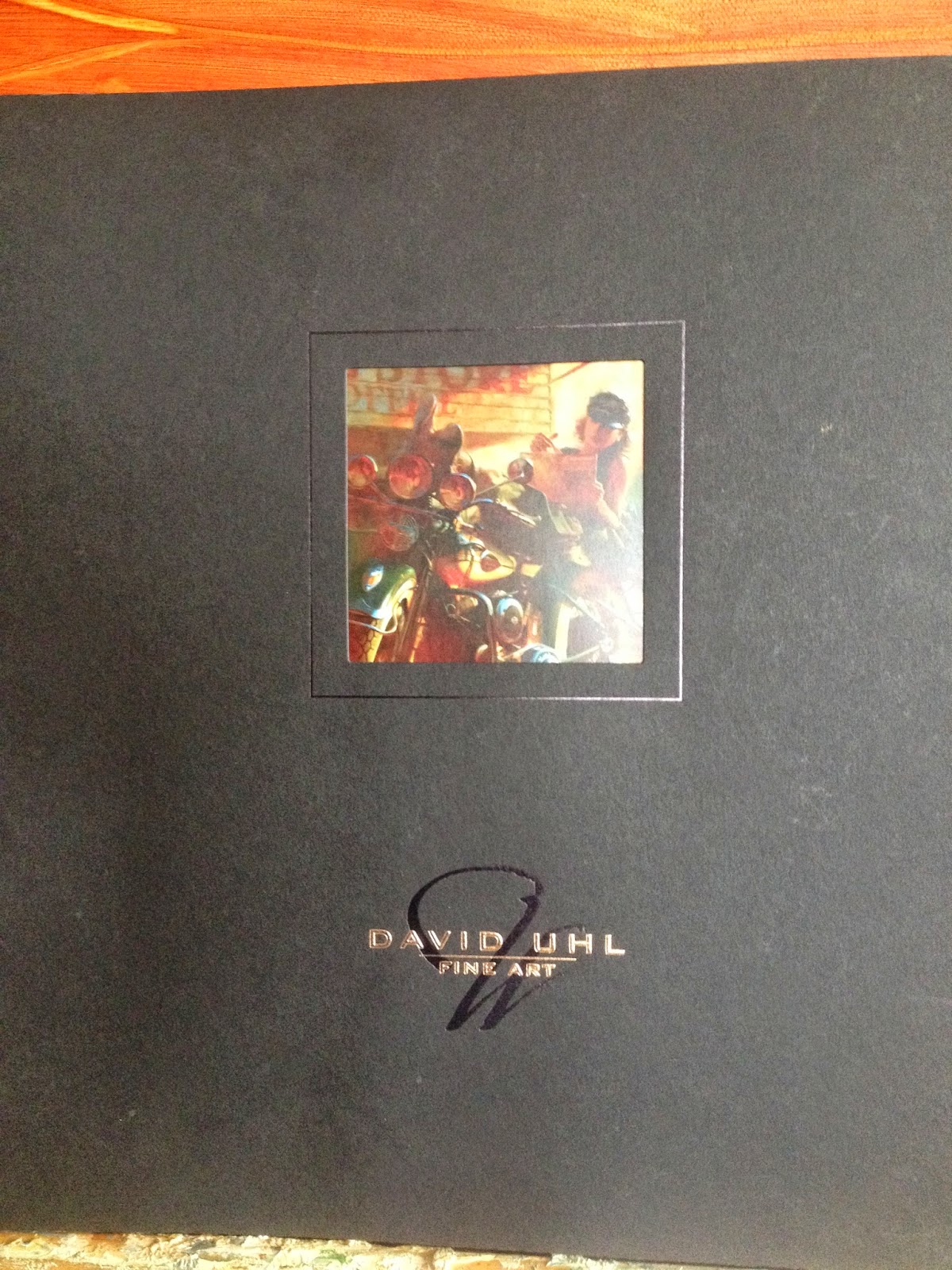 and yes, I was able to say Hi to David in person.

Have your own adventure by looking at David Uhl's website at this link:  uhlstudios.com
Posted by Unknown at 11:57 AM